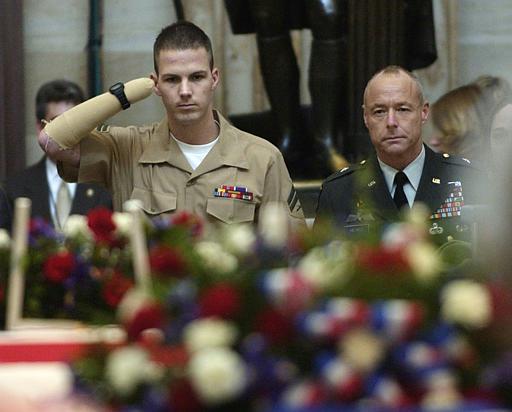 I bet you fuckers don't have the balls to tell it to that Marine. I guranetee you that he will stick that prostetic arm up your asses so far that you'll be takin a picture of it and postin it on plus 613, trying to pass it off as your own cock. You fat Fuckin Cowards.
Anonymous Report This Comment
Date: February 22, 2005 07:39PM

I have to agree too. Do you really think he will want to trade his purple heart in for a semester at college with a bunch of liberal hippes?....I doubt it.
Anonymous Report This Comment
Date: February 22, 2005 07:42PM

This is what the commercials are telling you on tv daily. Earn your degree, be a hero, protect your country......then they send you home in pieces. This is how your country and your president is trying to trick you. I'm not trying to disrespect any Marines or anyone else who served. Be smart enough to see through the bullshit.
Anonymous Report This Comment
Date: February 22, 2005 07:51PM

we do thats why we serve, you dumb fuck! There is more to it than getting a degree or being a hero. Enlist in the military and do 2 years, then you'll get it.
Anonymous Report This Comment
Date: February 22, 2005 09:31PM

been there done that you fucking cumsock.
Anonymous Report This Comment
Date: February 22, 2005 09:38PM

Where'd you serve 25117 - shoveling shit in Texas? You probably did enlist so that you could get a free ride, thinking that you would never have to do anything difficult. Either that or you thought you might be able to get laid because you had a uniform. The majority of our men serving do so because they believe in our nation and the values that we stand for. If anyone is a cumsock it's you!
Anthony Report This Comment
Date: February 22, 2005 09:43PM

I have nothing but respect for people that risk their lives for their country. In a world where most people obsess about their own personal gain, those who enlist in their country's armed forces should be respected, especially in this day and age of post 9/11 global turmoil.
Anonymouse Report This Comment
Date: February 22, 2005 09:49PM

what a load of pussies. you think joining the army is a stupid? obviously you don't love your country enough, why don't you do and ive in Iraq and see how much people love your liberal bullshit. Anthony nice comment good to see people supporting our proud troops abroad.
Anonymous Report This Comment
Date: February 22, 2005 10:33PM

tell the first guy that he's a pussy ass bitch

You guys all talk big, but I don't see any of you joining up. Just like Bush, bunch of cowards.
Anonymous Report This Comment
Date: February 23, 2005 01:07AM

Unfortunately, I personally think the strategies of the Commander-in-Chief is suspect/ wanting. In short, I think people disagree more on this than on joining the army.

Also, what's this about the prison scandal at Abu Ghraib or whatever. This is a war. Such dirty linen should not be made public. I guess Vietnam still continues to haunt the Army.

You are all stupid, Obviously you miss the point, Its not about who is right or wrong, Its about the sacrifice and loss, And as for the swearing at each other, Grow up, You dont know a thing about what you are going on about.
Anonymous Report This Comment
Date: February 23, 2005 04:04AM

You can't even get proper medical care if you are a Reservist.Watch the news.
Anonymous Report This Comment
Date: February 23, 2005 05:48AM

to mr.224204 you call people who dont agree with you cowards and so forth. Did you serve? Well I did and I would gladly do it all over again. I came back from desert storm and have gulf war syndrome because of it! But you know something I am proud to say that I served, I did my duty, with honor and courage so people like you can talk your trash and make your comments,but you and I know who the real coward is dont we Mr. 224204. All the men and women who serve in the military deserve your respect, but I guess having the respect of a coward doesnt really matter now does it. Have a nice day coward.
AwPhuch Report This Comment
Date: February 23, 2005 05:57AM

Here is some stories about real marines!

YOU WHO HAVE NOT SERVED IN THE BELOVED UNITED STATE MILITARY, ARE COMMUNIST. THAT IS UNLESS YOU HAVE A MEDICAL CONDITION THAT MAKES IT UNABLE FOR YOU TO DO YOUR DUTY TO YOUR COUNTRY. YOUR FOR FATHERS FOUGHT AND DIED FOR THE VERY FREEDOM THAT YOU LAUGH AT. DO YOU HAVE ANY IDEA WHAT THESE SERVICE MEN AND WOMEN PUT THEIR LIVES ON THE LINE FOR. IT SURE ISNT THE PAY OR THE FACT THEY MIGHT NOT SEE THEIR FAMILY AND LOVED ONES EVER AGAIN. THEY DO IT BECAUSE THEY HAVE SOMETHING INSIDE OF THEM THAT MAKES THEM WANT TO KEEP THIS BEAUTIFUL AMERICA FREE. IT IS THE COWARD THAT OPENS HIS MOUTH AND SAYS SOMETHING HE KNOWS NOTHING ABOUT. I SERVED IN THE UNITED STATES MARINE CORPS, AND I WOULD RE-SIGN UP JUST TO KEEP THIS LAND FREE OF ASSHOLES LIKE YOU ....

How hard is it for people to see that blind obedience isn't a good thing?

How hard can it possibly be for you to understand why it is that most of the world protests your actions, and the actions of the government you represent?

How can you continue to take orders from someone who has repeatedly proven his concerns aren't the high-minded ideals he spews out?

Why can't you think for yourselves?

Hey.."[email protected]", Do you honestly believe the bullshit that you are saying? Seriously? You are saying that everyone must jump onboard the fucking sinking ship that bush has created or we can be considered commies? You clearly need to stay in the military where your pea sized brain can be used for something constructive. Pick up your machine gun and go where your insane leader tells you to. In regard to you not seeing your wife while you are deployed in some small country getting shot for some useless cause...don't worry, she's doing fine....Us hometown boys will keep that pussy warm for ya. To ensure that we haven't confused your coast guard wannbe punk ass we'll recap what we have attempted to teach you.
1. Those who are fucking your wife back home while your in another country are not communist. We are just a bit smarter than you for not having to choose the service over a more respected career.
2. we'd better leave it at just one....I'd hate to ask someone from the Navy or Air Force to spend much time explaining what these words mean.

YES! Score one for the freedom fighters of Iraq! Down with american terrorists!
Anonymous Report This Comment
Date: March 05, 2005 11:38PM

now listen here fuckstain, its not about blind obedience, its about following the orders of those officers appointed over those who serve, and that includes the president. when i joined we werent at war and 9-11 hadnt happened yet, but it happened and i couldnt be prouder to be in the military.
Anonymous Report This Comment
Date: March 05, 2005 11:40PM

...also, everyone who takes that oath of enlistment understands that it can mean making the ultimate sacrifice. no, its not fair, but that is the choice we make and i for one stand by that choice.