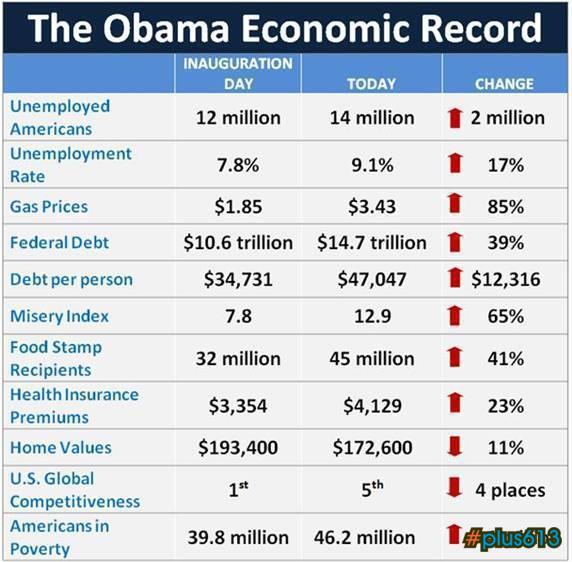 you're right, ................., Carter, Reagan and Bush all doubled down and O'dipstick took the reins and spurred us on. i sure hope that you're not claiming that because Bush snapped us all off in the ass that it's O.K. for O'fuckhead to put one right between our eyes?

While that is a bad record you have to take into account that some of it would have happened regardless of who was in the oval office and regardless of what fiscal and economic policies are implemented. An example of that is the fuel prices. There was also a Global Financial Crisis.

That doesn't fully absolve the politicians from their performances though.

I'd like to hear an Obozo supporter try to rationalize anything he's done without 1st attempting to reference his predecessor. If ever there was a completely lame-o tactic to try and justify anything this jackass has done, that's right at the top of the list, followed closely of course by the always at-the-ready racism/race card ploy

You wouldn't REALLY want that would you? I mean be honest, you'll just get pissed off, your blood pressure will go up and stuff like that. Don't do that to yourself, it's unhealthy and some of us here actually like you.

I don't support anyone. They're all full of shit as far as I'm concerned. I don't like any of them. Everybody blames everybody else and that's not how problems get solved.

It would be ever so refreshing to find someone capable of representing Obozo in a positive light without attempting to do so by way of comparing him to Bush 1st.

And .... I was never a huge fan of my fellow Texan but I'd take his accomplishments 7 ways to Sundee over the assclown we have now.

Anyone with a brain who can look at the above indicators and see that as positive movement by any stretch of the imagination on any of those fronts (and a LOOOONG list of others) .... I'd say a lot more than their vision needed a check up

There are plenty of people out there representing a positive view on the president. If you want to argue with someone and it really gets you off then there are plenty to chose from. Whatever makes you feel better I guess. It all looks like a futile pissing match to me.
Mrkim Report This Comment
Date: March 15, 2012 02:49AM

To us Type A++++sers it's a way of life and nearly as necessary as oxygen, except that debate is what I desire, argument never achieves anything.

And, finding any lib capable of real debate is about as easy as findin frog hair

It's just another pissing match and accomplishes nothing except people getting piss on each other but mostly themselves. I can get drunk enough to do that all by myself, thanks.

he supports what? lmfao!

So now Obama was expected to be Superman and stop the Bushwreck on the first day he took office? LOL!

Only NUTTERS buy that argument

Obama turned the Bushwreck around with the stimulus

Thanks for makin my points so eloquently Beast

At the end of the second world war, the US had half the world's wealth and incomparable security and global reach. The government was well aware of the massive power imbalance, and intended to keep it that way. This intention was outlined in a major state paper of 1948 (PPS23). The author was the chair of the State Department policy planning staff, respected statesman and scholar George Kennan, a moderate dove. He noted that the central policy goal was to maintain the "position of disparity" that separated our enormous wealth from the poverty of others. To achieve that goal, he advised, "We should cease to talk about vague and … unreal objectives such as human rights, the raising of the living standards, and democratization," and must "deal in straight power concepts", not "hampered by idealistic slogans" about "altruism and world-benefaction."
By 1970, US share of world wealth had dropped to about 25%, roughly where it remains, still colossal but far below the end of the second world war.
Only way is down guys, suck it up.

so...what about my first link Beast? you must think it's a better plan than Bush's plan of destruction?

oh i forgot...you might want to post links to less one sided stats. i won't laugh as loud if you do.