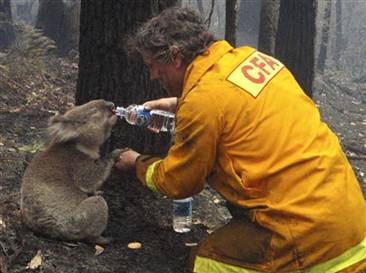 i hope the animal rescuers are in full force, there could be an extinction if this level keeps up
rogerramjet_2003 Report This Comment
Date: February 11, 2009 04:33AM

Koala rescued in wildfire-scarred Australia
Firefighter: 'He kept reaching for the bottle, almost like a baby'


Victoria, Australia: It was a heart-tugging scene borne by a chance encounter in the charred landscape of Australia's deadly wildfires: a koala sipping water from a bottle offered by a firefighter.

David Tree noticed the koala moving gingerly on scorched paws as his fire patrol passed. Clearly in pain, the animal stopped when it saw Tree.

"It was amazing, he turned around, sat on his bum and sort of looked at me with (a look) like, put me out of my misery," Tree told The Associated Press on Tuesday. "I yelled out for a bottle of water. I unscrewed the bottle, tipped it up on his lips and he just took it naturally.

"He kept reaching for the bottle, almost like a baby."

The team called animal-welfare officers to pick up the koala on Sunday, the day after deadly firestorms swept southern Victoria state.

"I love nature, and I've handled koalas before. They're not the friendliest things, but I wanted to help him," Tree said.

Slow-moving marsupials
Often mistakenly called koala bears because they resemble a child's teddy bear, the marsupial is actually a rather grumpy creature with a loud growl. It rarely comes down from the trees and doesn't like walking.

Koalas are especially vulnerable to wildfires because they move slowly on the ground.

The wildfires cut through parks and forests and sent countless wombats and other native species fleeing. One resident reported seeing kangaroos bouncing down the road with flames at their backs.

A count of the animals killed has not been made.

Tree said he found the koala in a burned-out forest near Mirboo North, about 90 miles east of Melbourne, Victoria's capital.

Koalas normally drink almost no water because they get almost all their fluids from the leaves they eat.

After the scorched koala sipped from the water bottle and Tree's crew moved on, animal welfare officials came by.

Koala recovering, has suitor
The koala, which turned out to be a female, was in pain but recovering with antibiotics, Jenny Shaw of the Mountain Ash Wildlife Shelter told Melbourne's The Herald Sun newspaper.

"She is lovely — very docile — and she has already got an admirer. A male koala keeps putting his arms around her," Shaw was quoted as saying. "It will be a long road to recovery, but she should be able to be released back into the wild in about five months."


The Royal Society for the Protection of Animals said it was establishing shelters to care for thousands of pets and livestock affected by the fires.

Despite her gender, the now famous koala is nicknamed Sam.

More than a million native animals may have perished in Victoria's fire inferno, a wildlife expert says.

The massive effort to rescue animals caught in the fire has begun with triage centres set up to assess injured wildlife at staging posts at Kilmore, Whittlesea and Redesdale near Bendigo.

The animals are then being treated and assessed by vets at nearby shelters, who make the agonising decision about which ones need to be euthanased.

Those animals still able to may wait several weeks before walking out of fire-affected forest, Gayle Chappell from the Hepburn Wildlife Shelter said.

Ms Chappell is among those working to rescue the animals and says the extent of the devastation may never be known.

"It [the animal death toll] will be in the hundreds of thousands, possibly millions," Ms Chappell said.

"We are not just talking the animals we are familiar with, there are gliders and all sorts of possums, antechinus [a mouse-like marsupial], bandicoots, birds — there is so much wildlife.

Koalas are also especially vulnerable to wildfires because they move slowly on the ground. (Read one firefighter's amazing koala rescue story here).

The wildfires cut through parks and forests and sent countless wombats and other native species fleeing.

One resident reported seeing kangaroos bouncing down the road with flames at their backs.

It is feared endangered populations of gliders, owls and lizards may be among the dead.

For those that have survived, the recovery process will be long and slow.

"They have lost their homes too and they are not going to be rebuilt in a year or two years, it is a much longer-term picture," Ms Chappell said.

"You can't reconstruct a forest."

Ms Chappell said Ms Reid escaped with her life, but the animals were not so lucky.

"It has been a real blow for everybody I think. That is what has really brought it home for everybody, hearing that Stella Reid's place was totalled and all her animals ... they weren't able to get any animals out at all."

Another part of the story


Sam the koala, made famous by footage of her drinking from a firefighter's water bottle during Victoria's bushfires, has died.

The badly burned koala became a symbol of hope for the survivors of the deadly bushfires that killed 173 people and left 7,500 homeless.

But just months after her rescue from the fires, Sam was diagnosed with cysts linked to the life-threatening disease chlamydia that has ravaged the koala population.