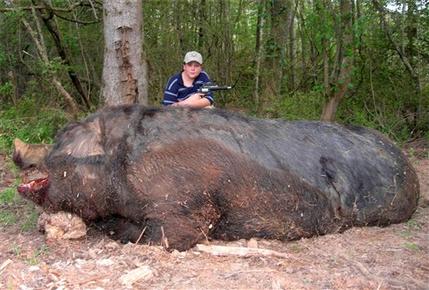 first of all i think the pic has been shopped a bit. that thing has got to weight at least a ton, maybe two.

second, lets say that its the size of a big bear. the kid looks to have maybe a 454 cassul. if he does it is entirely possible to kill an animal this size. I personally have a revolver that could bring down an elephant. easy. don't underestimate the power of the gun. lots of fag liberals have and that why they are all TERRIFIED of them and like to ban them.

ive seen a 180lbs hog that took at least 14 slugs and its still standing.
the weakest male hogs could take upto 4 slugs to go down.

but that picture is 100% photoshoped. that guy will need a burst of 20mm vulcan rounds

to bring him down.


MONTGOMERY, Ala. (AP) -- Hogzilla is being made into a horror movie. But the sequel may be even bigger: Meet Monster Pig. An 11-year-old boy used a pistol to kill a wild hog his father says weighed a staggering 1,051 pounds and measured 9 feet 4, from the tip of its snout to the base of its tail. Think hams as big as car tires.

If the claims are accurate, Jamison Stone's trophy boar would be bigger than Hogzilla, the famed wild hog that grew to seemingly mythical proportions after being killed in south Georgia in 2004.

Hogzilla originally was thought to weigh 1,000 pounds and measure 12 feet long. National Geographic experts who unearthed its remains believe the animal actually weighed about 800 pounds and was 8 feet long.

Regardless of the comparison, Jamison is reveling in the attention over his pig.

"It feels really good," Jamison said in a telephone interview with The Associated Press. "It's a good accomplishment. I probably won't ever kill anything else that big."

Jamison, who killed his first deer at age 5, was hunting with father Mike Stone and two guides in east Alabama on May 3 when he bagged Monster Pig. He said he shot the huge animal eight times with a .50-caliber revolver and chased it for three hours through hilly woods before finishing it off with a point-blank shot.

Through it all, there was the fear that the animal would turn and charge them, as wild boars have a reputation for doing.

"I was a little bit scared, a little bit excited," said Jamison, who lives in Pickensville on the Mississippi border. He just finished the sixth grade on the honor roll at Christian Heritage Academy, a small, private school.

His father said that, just to be extra safe, he and the guides had high-powered rifles aimed and ready to fire in case the beast, with 5-inch tusks, decided to charge.

With the animal finally dead in a creek bed on the 2,500-acre Lost Creek Plantation, a commercial hunting preserve in Delta, trees had to be cut down and a backhoe brought in to bring Jamison's prize out of the woods.

It was hauled on a truck to the Clay County Farmers Exchange in Lineville, where Jeff Kinder said they used his scale, recently calibrated, to weigh the hog.

Kinder's scale measures only to the nearest 10, but Mike Stone said it balanced one notch past the 1,050-pound mark.

"It probably weighed 1,060 pounds. We were just afraid to change it once the story was out," he said.

Mike Stone is having sausage made from the rest of the animal. "We'll probably get 500 to 700 pounds," he said.

Jamison, meanwhile, has been offered a small part in "The Legend of Hogzilla," a small-time horror flick based on the tale of the Georgia boar. The movie is holding casting calls with plans to begin filming in Georgia.

Jamison is enjoying the newfound celebrity generated by the hog hunt, but he said he prefers hunting pheasants to monster pigs: "They are a little less dangerous."

"famed wild hog that grew to seemingly mythical proportions after being killed in south Georgia in 2004."

So, if there isn't life after death, at least there's growth after death.

I thought it must've been `shopped, too, but I just saw on the news that it's true. The kid chased that big fucker for three hours and took him out with a pistol. The hog is over 9 feet long! Bacon anyone?
Anonymous Report This Comment
Date: May 26, 2007 02:22PM

Meat from a hog that big and running for three hours after being shot eight times probably is a little on the tough and gamey side. Anyone ever thought about that? I'll get my ham at the butcher's, thank you very much. At least I know it's good, clean meat. That fucker probably has worms.