jello biafra - free speech for all 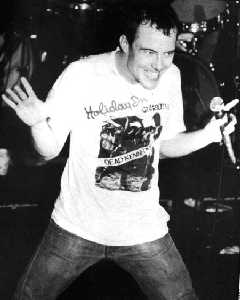 Jello Biafra (real name: Eric Boucher; born June 17, 1958, Boulder, Colorado) is a punk rock musician and political activist best known as the former lead singer of the Dead Kennedys. In the wake of the band's disbandment, he has become a solo musician and spoken word artist. In his political life, he is an active member of the Green Party and has participated in activism relating to his progressive political beliefs. Though he is a self-proclaimed anarchist, he claims that he is only an anarchist in his personal life, and that he does not wish to make society into an anarchy due to mankind's current inability to handle such a change. However, he is an advocate of civil disobedience and pranksterism in the name of political change. Biafra himself has been known to use absurdist media tactics in the tradition of the Yippies to highlight issues of civil rights, social justice, and anti-corporatism.

His stage name is a combination of the brand name Jello and the name of the short lived country of Biafra. The country of Biafra attempted to secede from Nigeria in 1966; after four years of fighting and horrific starvation, Nigeria regained control of the nascent Biafran state. Jello Biafra came up with his name as an oxymoronic combination of a violent civil war and a consumer product.

Thanks for the info Bob. I saw the DK's in 1984 at my local pub in Sydney Australia. When Jello come on stage everyone started spitting on him and in minutes, he was covered from head to toe in gollys! He seemed to thrive on it and the crowd was going wild. Although I was fearing for my life as there was so much violence in the 2000 strong crowd on the night, I had to get out but it was still a night to remember. PS: I've heard some of his political speeches and I admire what he does these days.