Revenge to .. help their base? 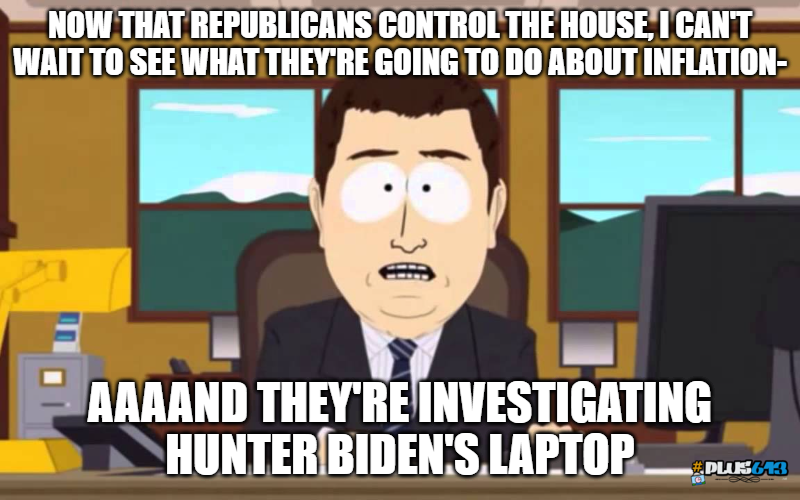 You think the House of Representatives alone would be able to fix the inflation that the President created? You really think that?

As for the laptop.. would you care if it were Don Jr's?

I wouldn't care if it were Don Jrs. Or Seniors. Or the Pope's laptop.

How does a president cause inflation though? Same reason the senate can't fix it, neither can he. Similarly, causing it.

You'd think the Republicans in office would focus on today's issues, not yesterday's grudges.

Also, I somehow think that the President, House, and Senate have the power to say to the retail sector: "Hey, we're aware that you have dialed up up your profit margin from 10% to 50% to bilk people during the pandemic. You had your fun, now get prices back to normal because we know very well this 'inflation' we're seeing isn't actually inflation, it's greed."

It's capitalism in its purest form. People will charge whatever people are willing to pay. Prescriptive pricing is the direct opposite of that.
Seeker Report This Comment
Date: November 26, 2022 06:36AM

The inflation is global. Nobody in the world has been able to solve the problem. It is also true that companies have taken advantage of the situation and raised their prices unreasonably. A government can't stop that without destroying the free marked.
I don't understand why some of you blame your president. USA is actualy doing much better than most other countries. To think that Trump could have solved the problem is simply crazy.
pro_junior Report This Comment
Date: November 27, 2022 12:03AM

The Biden administration is in part responsible for inflation because they have taken steps that have limited the production of oil in the USA, which results in higher demand for oil from other countries. Higher demand means higher prices. Since the demand is worldwide the prices rise worldwide. If you increase the cost of fuel the result is higher costs to transport everything from raw materials to finished goods. Higher transportation cost means higher costs for all goods and services. Obviously there are other factors at play, i.e. Putin/Russia keeping their oil off of the world market, etc.
Joe Biden basically said he was going to kill the oil and gas industry when he was campaigning so no one should be surprised that everything costs more now.
woberto Report This Comment
Date: November 28, 2022 06:20AM

I once knew a guy who cooked synthetic cocaine. It's just like synthesizing caffeine, and uses the same equipment and almost identical precursor chemicals. His cover for buying the chemicals was that he was doing a startup company for a new energy drink with caffeine. The first time I met him he was years later after he got out of prison. Weird guy. He spent years of his personal free time designing "the perfect computer chair." Captivated the heck out of me. There were literally dozens and dozens of parameters and important features, as well as what he called "anti-features" to avoid. He pointed out the "obvious" fact that the primary reason computer chairs swivel and have wheels is so that the user can easily get in and out of the chair at a desk. A recliner chair at home doesn't need wheels or swiveling because theres no desk in the way. But beyond that, recliner chairs are sub-optimal for computer work because they tend to be built for fat people, with profoundly impractical armrests. And of course, the ideal computer chair would be paired with a split keyboard attached to the arms, which would be incredibly uncomfortable with the awful armrests of a recliner. I actually walked into a huge furniture store the other day and asked them if they had any recliners designed for normal sized people, and the owner looked at me and she said, "You know, I must get 5 people a day asking me about that. But no. Manufacturers just don't make them." I did end up buying a couch from her though, after trying out at least 30 couches. It still sucked. Nothing compares to the super deep and soft couch set my uncle had when I was a kid. Flop right down on it and just sink, put my feet up on the table, grab the Gamecube controller and play Super Smash Melee with my cousins and friends for hours and hours. We were all so excited when we got the Wii and started playing Brawl. Holy shit was the disappointment palpable. It was so bittersweet too. All these awesome new characters to play, new awesome stages, but the game mechanics were all so... ruined. Tripping? Motherfucking TRIPPING while trying to move, just because you're doing better than the other players?? None of us were exceptionally good but we all noticed. I haven't played Smash Bros since Brawl though, being grown up and too busy, but I hear Ultimate is actually pretty great.