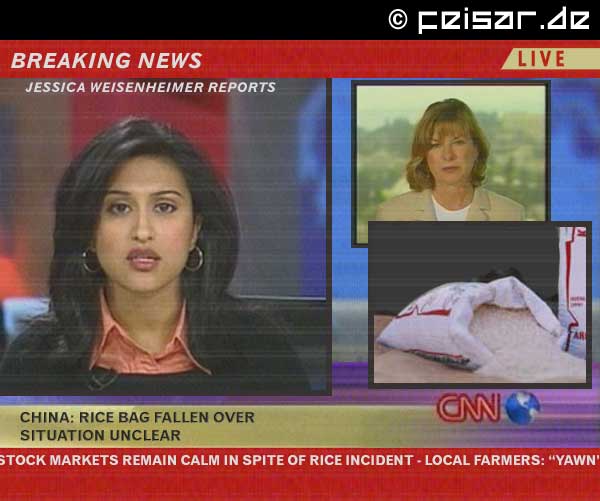 The United States has ceased talks with China's government and is now threatening military action because the rice bags could be an unconfirmed WMD.
Mausi Report This Comment
Date: October 13, 2004 01:06PM

If Bush wins, all of a sudden, there’s gonna be good reasons to attack some other countries again. Here’s the reason why China must be attacked to bring back freedom to the world....
chick pea soup Report This Comment
Date: October 13, 2004 02:01PM

Weisenheimer has some DSLs baby! she could give me a Weisenhummer any day
lyric101 Report This Comment
Date: December 23, 2004 08:59AM

syshack.. if there was only one dumb fuck as stupid as you - it would be entertaining. The fact that there's millions of you scares the shit out me. Chinese have nukes moron - and not any old nukes either, they stole all your latest nuclear technology!
Shadow Report This Comment
Date: February 03, 2005 12:23PM

Lol a debate on a picture ...
Ws it designed by a german person?
It reminds me on "stell dir vor in china is a sack reis umgefallen"
what means "wow , a rice back just has fallen over in China" you say it when the topic a persons speaks about don´t interesst you ( sorry for my bad englscih ... I´m German)
And if itßs so youre discussing over a german "spruch"

Don't know much about the fallen rice crisis, but the news anker is kind of cute.
Anonymous Report This Comment
Date: March 21, 2005 03:41AM

I wonder how you would say that on the news.
"Today Sadam surrendered to the USA. Also in China, a bag of rice fell over. Top investagators cannot who or what tiped the bag over."