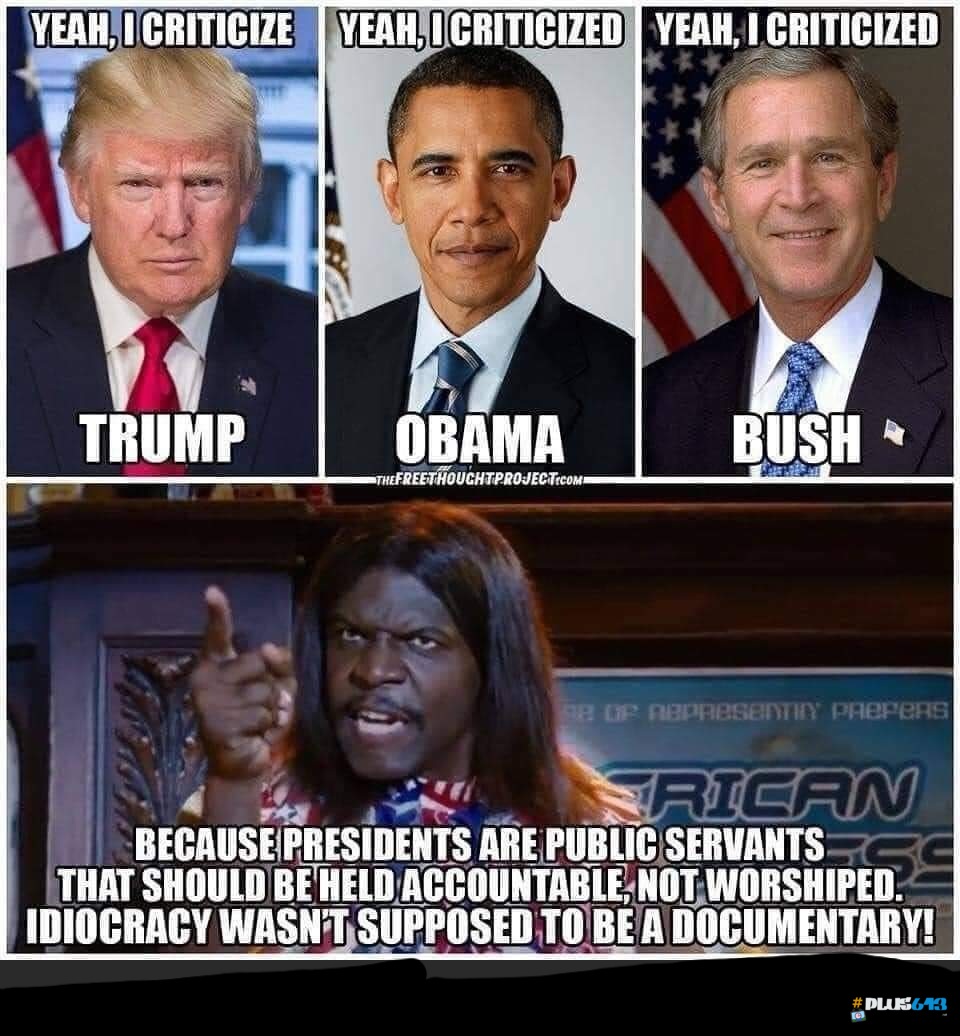 It's not a cult of Trump haters, it's people who've watched him and even known him for decades and know him for what he is. The lovers, on the other hand, for many of them cult is the only way to describe it.
Robert. Report This Comment
Date: January 18, 2021 01:53AM

Yeah, put that in your bong and smoke it, PJ

Trump supporters support him because just like us he is pro constitution.
Andrew. Report This Comment
Date: January 18, 2021 03:00PM

And there's the problem right there....... The Constitution.
The Constitutional Amendments are called "amendments" for a very good reason. When one or more of them are not working, like right now, they need to be amended, like right now. Amendments within the Constitution have been changed in the past, they can be changed again, now and in the future, as the world changes. Our next President, a real politician, has the skills to make this happen because he knows how to work with Republicans, Democrats and everyone in between to help pull America out of the shithole it was dragged into by the outgoing madman who should have never been allowed to run for office in the first place. If there was ever a President of the United States of America who actually deserved to be assassinated, it would be Donald Trump. A madman who bought his way into the oval office, who did not work his way up through the political system, who did not work for the people of America, and did not earn their respect. The sooner he is thrown out of office and thrown into jail, the better for every single American citizen.

So please quote my words. Make a reference of this to discuss in 4 years time, when it comes to the end of President Joe Biden's first term in office. (Yes, I know he may not run again)

"America, overall, WILL be in much better condition than it is right now, in 4 years time. And President Biden will be the man to thank for that happening" MARK MY WORDS.

So Trump bought his way into office because he used his own money instead of other people's money? According to the constitution the only requirements for running for president is age and citizenship which means any of us could become president if we meet those requirements. Being a politician is not and should never be a requirement for office. Biden would never even make one year in office before Nancy has him removed. As for the next 4 years we will just have to wait and see what happens.
CornPop Report This Comment
Date: January 19, 2021 06:17PM

"Our next President, a real politician"

Biden is a real politician and he is a real criminal.

"Yeah, put that in your bong and smoke it, PJ "

Wow that's some sage fuckin advice Bob...
I took your advice and I put quasi's dodged question/non-answer in my bong and smoked it..and whaddayaknow I'm riden with biden now!
Yep it's true..can't believe I didn't see the error of my ways sooner...so glad to be on the winning team now!

Does anybody know where I can buy some estrogen??

It reminds me of the time I caught the ferry over to Shelbyville. I needed a new heel for my shoe, so, I decided to go to Morganville, which is what they called Shelbyville in those days. So I tied an onion to my belt, which was the style at the time. Now, to take the ferry cost a nickel, and in those days, nickels had pictures of bumblebees on 'em. Give me five bees for a quarter, you'd say.

Now where were we? Oh yeah: the important thing was I had an onion on my belt, which was the style at the time. They didn't have white onions because of the war. The only thing you could get was those big yellow ones...

Turnip Juice! Is what I say.

"help pull America out of the shithole it was dragged into by the outgoing madman who should have never been allowed to run for office in the first place"
Where to start? America is not a shithole. Nobody deserves to be assassinated, not even Bin Laden. Madmen, good TV show. The only way to get nominated and elected is to buy wour way, that's the system I'm afraid. The Don earned over 80 million peoples respect.

"Make a reference of this to discuss in 4 years time,"
No anon, nobody cares about you or your discuss (hey are the Olympics going to go ahead this year?) so flame up on this thread and get your moneys worth.

"America, overall, WILL be in much better condition than it is right now, in 4 years time."
Well you could be onto something here because the coronavirus needs to be taken seriously. Apart from that, Democrats always leave the country (America) in a worse state than when they came in and that's a fact that can't be denied (because I said so here). However there will be quotas for fucktards, I mean LGBTQI-tards, in every government department and that's a good thing right?

Well fuck me Woberto.
You say big words for a little man, who lives in AUSTRALIA!!!
You know a lot about American politics for a dip shit who lives on the other side of the planet.
Good on you dickhead, keep going.....

woberto - "....Democrats always leave the country (America) in a worse state than when they came in....

In my working life I lost jobs twice during recessions under Republican Presidents and the recoveries from those recessions happened under Democrat Presidents.
The great depression happened during a Republican administration and the recovery was under a Democrat who was so loved he was elected four times. Trump inherited a growing economy which continued to grow until he wrecked it with his poor response to coronavirus when he knew how dangerous and deadly the disease is - he politicized it and failed to meet the challenge head on. I've always been an independent voter with no party affiliation and in the past had a slight lean to the right but I've lost a lot of confidence in the Republicans, especially since they've let the party get hijacked by Trump's cult of personality. The vote was fair and legal; the American people have spoken. Trump lost, get over it, time to move on.

Thanks Q-Man. But I wasn't thinking back that far.
I suppose the legacy of Clinton and Obama were tarnished by a replublican majority (House and/or Senate) and that works both ways at times.
In the end it's why most counties have ended up in a two-party system.
One will spend money that can never be recovered but will "educate" it's population for the betterment of the world.
Another will invest in the system that we all hate but in return provide greater wealth and a better standard of living for thse who are willing to play the game of life.