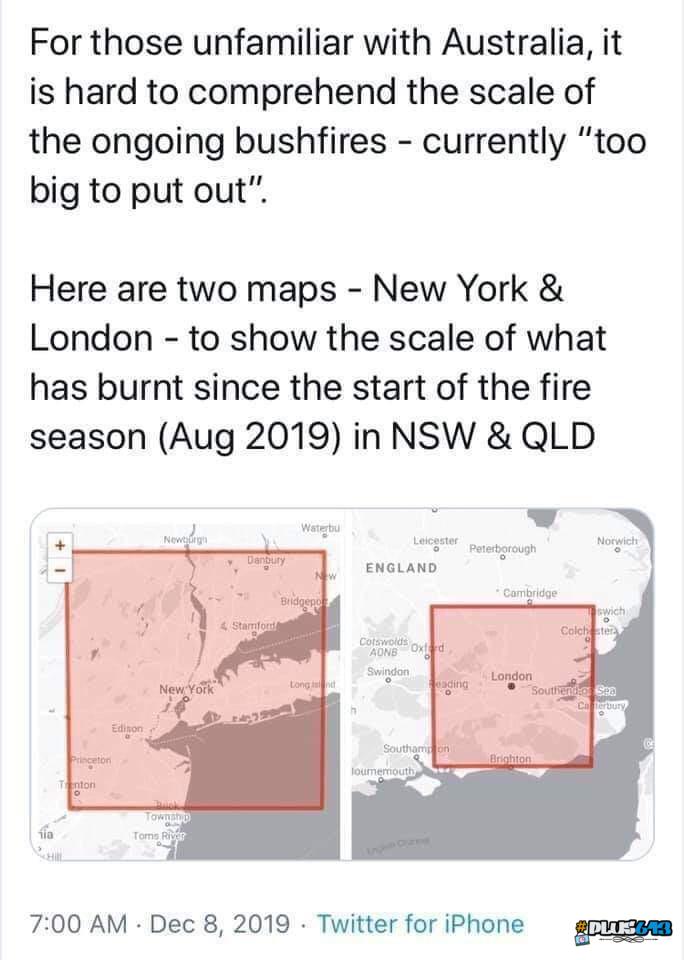 That's right, avoid a comparison with California. I haven't looked that hard. But I don't see anything jumping out to compare the two.
But Australia's advanced warning system looks cool:
[www.washingtonpost.com]

I doubt the author was avoiding a comparison with California, but..

The Mendocino Complex Fire in 2018 burned more than 459,000 acres (186,000 ha), becoming the largest complex fire in the state's history, with the complex's Ranch Fire surpassing the Thomas Fire and the Santiago Canyon Fire of 1889 to become California's single-largest recorded wildfire.

Currently in NSW as of 11th of December 6.7 million acres have burnt.

That's just one of the 5 states that is on fire at the moment. And officially were 2 weeks into the fire season, all this kicked off in spring

Yeah everything is always a competition with you. I've been reading this for a while, you always have to be first, always have to be right. How pathetic is that? You need to "win" natural disasters? You still lost. I don't get it. It's an internet forum. It's as if you think you're something special.

Only when something is wrong, Froopy.
Comparing with California is the blatantly obvious thing to do IMO. But Anonymous didn't. Instead the comparison was with 2 locations that would never have a wildfire. It seemed silly. I did a quick Google search and saw no comparison as well. That was weird. But I did learn about Australia's warning system. So I made my post. Pulse stepped up. I learned something useful on 20191215. That was my win.
OK, so people are supposed to contribute to forums when they think that they are wrong? That seems silly as well.
"I don't get it." Well sir, I get that.
"Something special" is a work in progress.

A massive amount of Victoria (my state) is on fire now too; The Guardian has a map (which is where this pic was taken from clearly) showing how big the areas burnt is; doesn't have Victoria listed on it yet, so the data is a bit old

* 16 fires are burning at emergency level across Australia, 8 in Victoria and 8 in NSW, with the entire East Gippsland region under an emergency alert.
* One firefighter has died overnight, and others injured, in a “freakish weather event” near Albury, described as a “fire tornado” that overturned a ten-tonne truck on flat, stable ground.
* In Victoria, four people are missing, and premier Daniel Andrews said authorities “have real fears for their safety”.
* 4,000 residents have been evacuated from the town of Mallacoota and are sheltering on the foreshore, as the firefront hit properties this morning. Photos taken from 9am showed the sky pitch black.
* Victoria’s emergency services commissioner, Andrew Crisp, confirmed “significant property losses across all of East Gippsland”.
* 5,700 homes are without power in East Gippsland, and more than 200,000 hectares have been burned.
* 200 new fires started on Monday, and 60 new fires started from midnight until now. These conditions were worse than predicted, and the bureau of meteorology will be updating its forecast to be worse than originally thought.
* In NSW, residents of Cobargo were evacuated as the firefront reached the town and impacted homes.
* People in bushfire prone areas between Batemans Bay and Bega, and also the south coast town of Tathra, have also been told to evacuate.

I had a quick look at the map from the Guardian. The area shown (even with the out of date data) is larger than the entire country of Wales!
pro_junior Report This Comment
Date: January 08, 2020 05:26PM