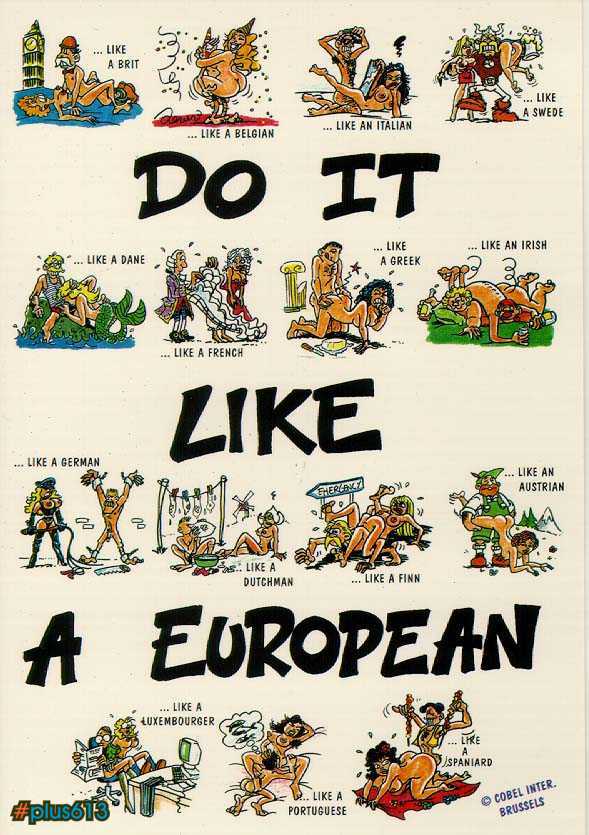 I am sure that nobody in Europe is fat?

I am not saying that there aren't fat Americans, christ I see them waddling around everyday, but broad sweeping statements that don't mean shit are usually left to our president

really europeans never get to american fat levels and if they do they never leave the house so you don't have to see them anyway
Anonymous Report This Comment
Date: January 13, 2005 03:23PM

Obesity tends to run in families. This is caused both by genes and by shared diet and lifestyle habits. Having obese relatives does not guarantee that you will be obese.

Obesity is considered a chronic (long-term) disease, like high blood pressure or diabetes. It has many serious long-term consequences for your health, and it is the second leading cause of preventable deaths in the United States (tobacco is the first).

Just like everything else...Americans are each European country rolled into one. We do it all...only better! hehe...take it easy...it's only fun here.
Anonymous Report This Comment
Date: January 13, 2005 10:38PM

Aside from very rare cases, it is wrong to consider obesity a disease. It is largly (no pun intended) due to people that do not eat or exercise properally and it is fully preventable by doing so. To call it a disease is to only provide those people with another excuse not to pony up and take responsibility for themselves and their own damn health. Their unwillingness to do so, just makes health care and all the rest that much more expensive for the rest of us that take care of our bodies.

Yeah, some people get obese for medical reasons beyond their control - but 95% or more, they could prevent it and do something about it. They just chose to stick another Krispy Kreme Donut or Big Mac in their mouth instead while riding the couch all night and surfing channels.

Obesity in America is largely attributable to (a) terrible diets (primarily sugar), and (b) infrastructure that values roads and driving over walking and normal levels of exercise.

Europeans, generally, aren't fat. Except for the British, they tend to eat rather well. Among Americans it tends to be those in the center of the country, not the coasts, who live in walkable cities (SF, NYC, Seattle, Boston).

[email protected]:
I am not saying obesity is a disease, doctors consider obesity a disease. Just as depression is also a disease. Obesity is as rooted in the mind as it is in the body.

I live in the Midwest and I am not a 5% body fat kind of guy, but I can see my cock and my feet when standing.

So all of you Europeans that think that every American is fat, suck a "fat" one.

I could make generalizations all day (every Frenchy is a coward, Italians are sweaty and greasy, every Irishmen is a drunken buffoon, all Germans are Sado-Masochists with poop fetishes, all British men are cross dressers with terrible teeth) but I don't, because I am not a small minded twit.

This is a funny picture.
I am not fat.
Me = Happy

I do, however, agree that obesity is a huge problem in the United States.

The pun was intended.

Americans are no longer the majority in America, America is the melting pot of the world, the irony here is that, to call an American fat is to call every nationality in the world fat.

Sorry to break it to the EuroTrash, but there are many countries in Europe that are "fatter" than the US.

All of you septics seem to be fat on purpose but why are your photography skills so lacking-----fat cameras ??