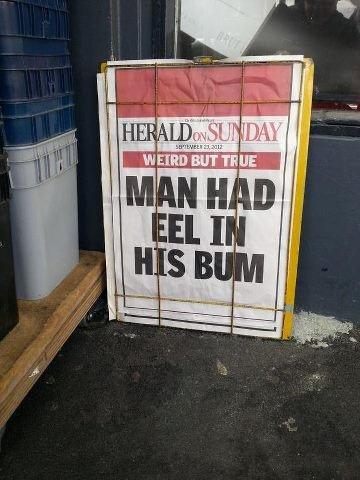 Man gets eel stuck up his bum

DOCTORS in New Zealand have successfully removed an eel that became lodged up a man's bum.
The un-named patient rushed to A&E in Auckland last week with the embarrassing problem.

Medics x-rayed the man and discovered the fishy visitor wedged inside him.

It's unclear how the eel ended up inside the man - but staff at the hospital insist it's the weirdest medical emergency they've ever encountered.

A hospital source told the New Zealand Herald: "The eel was about the size of a decent sprig of asparagus and the incident is the talk of the place.

"Doctors and nurses have come across people with strange objects that have got stuck where they shouldn't be before, but an eel has to be a first."

After a painful procedure, doctors removed the slippery intruder and the red-faced man was sent home.

He said: "In response to a direct query from the Herald on Sunday, we can confirm that an adult male presented at Auckland City Hospital this week with an eel inside him.

eels up inside ya