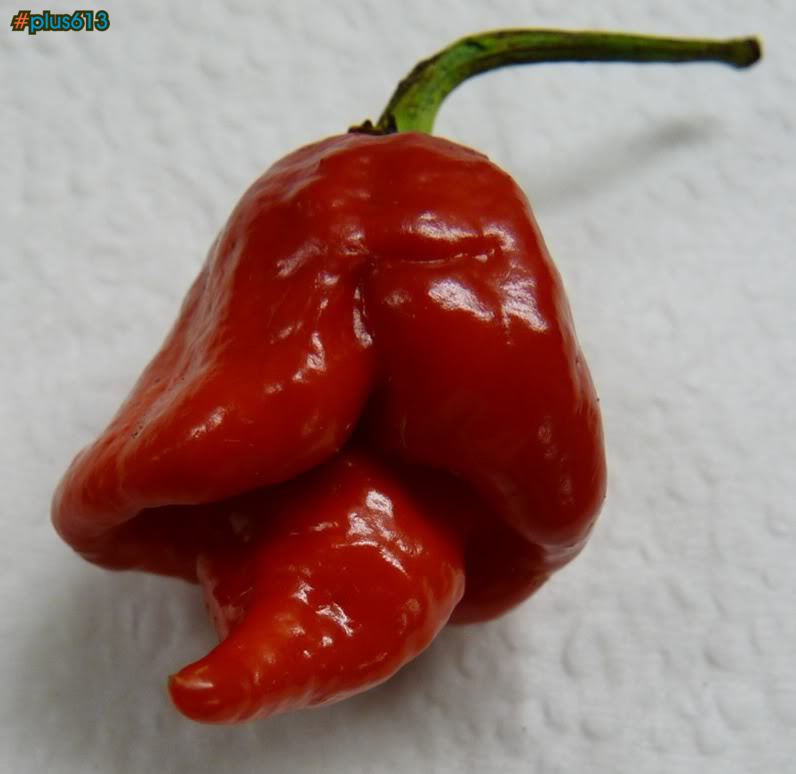 The Trinidad Scorpion Butch T pepper is so strong that those who handle it must wear protective gloves. Exposure to the eye or skin near the eyes when handling this pepper could cause temporary blindness. While preparing the Butch T, one should wear a chemical mask or a body suit to defend against fumes given off in the cooking process.
Mrkim Report This Comment
Date: January 10, 2012 11:05AM

Mmmmmm, sounds yummy and challenging all at the same time

Are these the famed Merciless Peppers of Quetzalacatenango … grown deep in the jungle primeval by the inmates of a Guatemalan insane asylum? (AKA Guatemalan Insanity Peppers)
¤¥¤ Report This Comment
Date: January 11, 2012 06:04AM

I guess you could call it the Tobago Blindness Pepper.

They are grown in Trinidad/Tobago.

It is named after Butch Taylor, the owner of a hot sauce company who is responsible for propagating the pepper's seeds.

The "scorpion" peppers are referred to as such because the pointed end of the pepper is said to resemble a scorpion's stinger.

Nothing to do with Guatemala or insanity.The Ghost pepper's record wasn't broken until 2011, and then it was broken 3 times in one year. I have a feeling someone out there has a pepper in the works that will beat this one soon.

Article I read says they're grown in Oz. Maybe they originate from Trinidad but an Aussie guy is growing them even hotter than normal.
¤¥¤ Report This Comment
Date: January 11, 2012 12:37PM

You're right Blah, the actual pepper was grown in Australia. Butch Taylor is credited for developing the strain it came from and selling the seeds via a company that is also in Australia. The type of pepper that was genetically altered to create the seeds comes from Trinidad. Butch T lives in Baton Rouge LA, so at a strech you could call it the "Baton Rouge Blindness Pepper".

I learned a lot from the little research I did on this subject, like that it's not only the type of pepper but the conditions it's grown in that determine how spicy it is.

Pretty cool to read about. Just looking at this pic kinda makes me want something spicy, so does reading about them. I gotta see what's on the menu tonite now.
quasi Report This Comment
Date: January 11, 2012 07:08PM

I suspect this picture is making my computer overheat.