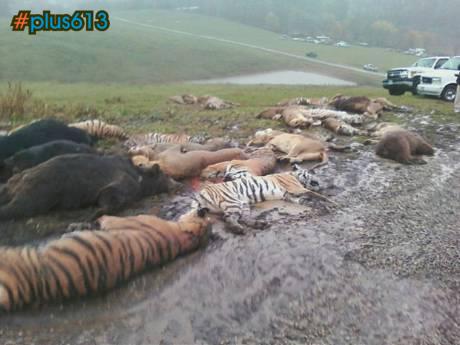 I used to go tent camping in this area. Glad I wasn't doing that last night.

"Allegedly" did that then killed himself.
(if that's how you spell it)

What a damned shame and totally reprehensible decision they made to kill these magnificent creatures. Surely there MUST have been a better way to handle this without the unacceptable carnage.

They should have banned the now deceased idiot from owning or keeping these animals in light of the fact that he had problems managing and containing them on previous occasions.

The report I saw on this said the major problem they encountered was the animals were released at night.

Coupled with the idea that it takes 3 minutes for a tranq dart to take effect, what else can you do to stop a charging tiger at night short of killing it?

If this idiot had released these animals in daylight they might have had a chance to save them. In darkness what real defense could they have had for the local people but to kill the animals?

I agree it's sad and a terrible loss of some truly magnificent animals, which is awful, but I'll always put the value of human life above that of animals

I also think that in that very rural part of the state there probably weren't enough tranq guns around to deal with over four dozen huge animals in a timely manner; they probably normally only have to deal with a dog or two every couple of months.

Woberto, they're saying he opened the pens then killed himself.

I agree Kim, human life is always more important than animals. I imagine we will hear from PETA before long on this matter, they think animals lives should take priority over human's.
quasi Report This Comment
Date: October 20, 2011 01:51PM

I think since Jack Hanna was on the scene PETA will keep it's trap shut about how the situation was handled. Saw him interviewed this morning and he obviously hated it but agreed with how it was handled and confirmed my supposition about the availability of tranquilizer guns. He also said it sometimes takes 8-10 minutes for the drugs to take effect and one of the animals they did try to tranquilize charged the person who had used the dart gun and had to be shot. Folks need to also remember that those guns need to be used at a much shorter range than a rifle, puting the user in greater danger, especially when there are many more animals nearby.
fossil_digger Report This Comment
Date: October 20, 2011 02:09PM

are they bottlin' up the tiger blood today?

Well Quasi, PETA has never been reasonable in the past on anything having to do with animals.