Mark Webber, Fernando Alonso - side by side through the deadly Eau Rouge 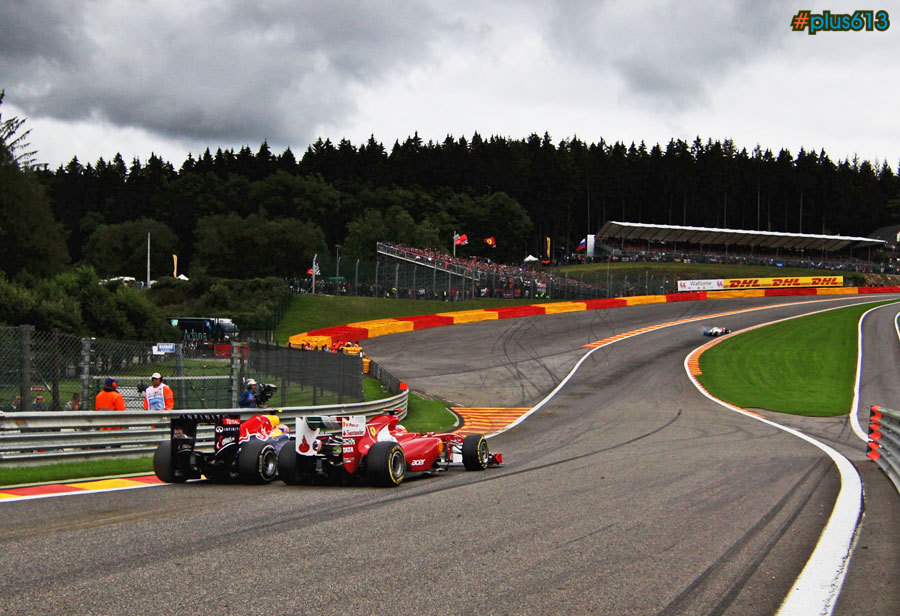 Comments for: Mark Webber, Fernando Alonso - side by side through the deadly Eau Rouge
GAK67 Report This Comment
Date: September 01, 2011 04:15AM

The picture doesn't do it justice - they were doing 180+ mph at the time and were inches apart. It is one of the gutsiest and best passing manoeuvres I have ever seen.
pulse Report This Comment
Date: September 01, 2011 04:57AM

Nowhere near does it justice. As GAK said, 180+mph (300+km/h), inches apart, through a section of track that numerous people have died at without trying to overtake somebody through it. Mark Webber said he would not have attempted his breathtaking overtaking move through Eau Rouge at the Belgian Grand Prix with every driver on the grid.

Webber nailed Fernando Alonso through the entrance to the 185mph switchback where drivers experience two Gs of compression as the track angles upwards and kinks to the right. The Red Bull driver kept his throttle wide open throughout, forcing Alonso, who had just exited the pits, to lift and file back into position.

The cars were inches from each other at the fastest point of the corner and when asked if Webber had calculated the move or it had been made on impulse, he responded: "Well, you don't have much time to get the calculator out at that point, mate, so I think most of the race I was still charged with frustration from the start, so when I came out behind Fernando, obviously we were very, very close going down into Eau Rouge and I knew Fernando would have been using some KERS so I was using some KERS as well. I got a tow, obviously, and then I thought if I can get to the inside then I might have the line but obviously both of us are very experienced, we both don't give much too easily, so it was a good battle and very, very rewarding that it worked out OK."

At least it wasn't a McLaren he was passing.

"At least it wasn't a McLaren he was passing."

Yeah, nah. Good dig at Hamilton though - not that I agree with you. I just don't like seeing McLaren's being overtaken. Mind you, with the straight line speed the McLaren's had at Spa, especially early in the race, it would have been an easier manoeuvre than getting past Alonso

Haha.. i think Hamilton has copped more crap than he deserved, though that said he's now have 4 official reprimands this season. One more and it's a (from memory) 10 place grid penalty at the next race.

Usually the McLarens are the ones to beat in straight line performance; not sure what happened at Spa. Button had speed, but .. just not enough, especially not once the tyres started to drop off in performance.