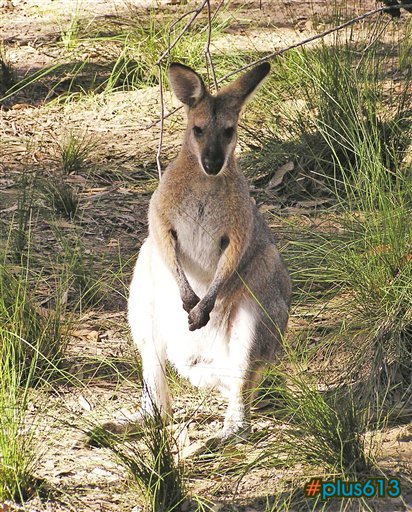 SYDNEY (AP) — Wallabies snacking in Tasmania's legally grown opium poppy fields are getting "high as a kite" and hopping around in circles, trampling the crops, a state official said. Tasmania Attorney-General Lara Giddings told a budget hearing Wednesday that she had recently read about the kangaroo-like marsupials' antics in a brief on the state's large poppy industry. Tasmania is the world's largest producer of legally grown opium for the pharmaceutical market. "We have a problem with wallabies entering poppy fields, getting as high as a kite and going around in circles," The Mercury newspaper quoted Giddings as telling the hearing. "Then they crash. We see crop circles in the poppy industry from wallabies that are high." Calls to Giddings' office were not immediately returned Thursday, and The Associated Press was unable to obtain a copy of the brief she cited. A manager for one of two Tasmanian companies licensed to take medicinal products from poppy straw told the newspaper that wildlife and livestock — including deer and sheep — that eat the poppies are known to "act weird." "There have been many stories about sheep that have eaten some of the poppies after harvesting and they all walk around in circles," Tasmanian Alkaloids field operations manager Rick Rockliff said. Others in the local poppy industry could not be reached for comment. Tasmania supplies about 50 percent of the world's raw material for morphine and related opiates. About 500 farmers grow the crop on 49,420 acres (20,000 hectares) of land.
PrOpHeT Report This Comment
Date: June 26, 2009 10:13AM

That's how we roll yo