Crocodile devours shark in battle Down Under 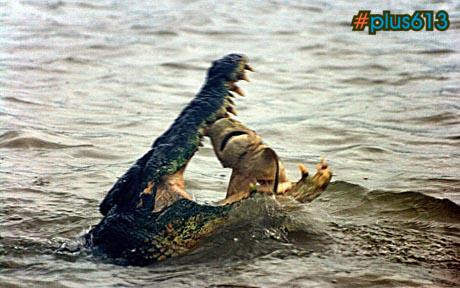 Comments for: Crocodile devours shark in battle Down Under
rogerramjet_2003 Report This Comment
Date: March 12, 2009 10:52AM

A crocodile took on a shark in a clash of the titans Down Under, but the reptile came out on top.

Craig Van Lawick was aboard the commercial barramundi boat on the Wildman River, east of Darwin, in the Northern Territory when the crocodile started eating the shark.
Photo: Icon Images/Newspix


The 15ft saltwater crocodile began to eat the shark only metres from a boat of fisherman.

Craig Van Lawick was aboard the commercial barramundi boat on the Wildman River, east of Darwin, in the Northern Territory when the crocodile started eating the shark.


He said: "There was not a whole lot of sound. All we could hear was the crunching sound."

Mr Van Lawick added that he was unsure about the type of shark involved, saying it was eaten too quickly for him to work out.

Crocodiles have been spotted eating sharks in Australia on a number of occasions.

Last year an 8ft crocodile was photographed dragging a shark from the Daly River in the Northern Territory to finish its prey off on land.

And the year before a croc took on a deadly bull shark, responsible for numerous fatal attacks on humans around the world.

The saltwater crocodile is the largest of all living crocodiles and reptiles. It is found in suitable habitat throughout Southeast Asia, Northern Australia and surround waters.

They are among the most aggressive predators in the world and can grow up to 23 feet in length and weight more than a tonne.

About a dozen people have been killed in crocodile attacks in Australia in the past 20 years.

Everything is bigger in Oz, didn't you know that?