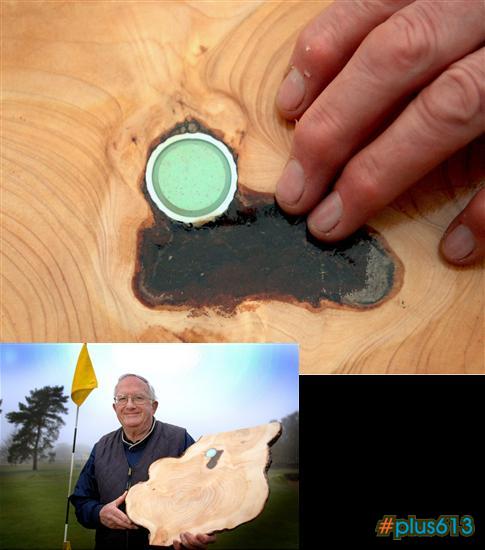 A long-forgotten hook and an astonishing slice of luck have combined to create a unique trophy for members of one of Norfolk's top golf clubs.

The story begins years ago when an anonymous golfer stood on the first tee and hooked his ball into a high hedge of conifers, planted between the hole and the ninth green. The ball was lost without trace - until now, when the winter programme at Eaton included cutting down the trees.

As greenkeeper Richard Mitchell sawed the felled trees into lengths he realised he was looking at a cross-section of trunk - with a golf ball embedded in it.

“It's an incredible find,” said the Norwich club manager's Peter Johns. “It was pure luck that it was discovered. If Richard had cut the trunk an inch or two either way we'd never have known the ball was there.

“We think the ball came off the first tee, went into the trees and was lost. It must have lodged in a fork or embedded itself in the trunk and the tree just grew round it.”

The cross-section - inevitably known as a tree wood - was entrusted for preservation to Jim Cook, a past captain and skilled woodworker. It's thought it will become a trophy and one idea is to use it as an honour board to record all holes-in-one at the short ninth hole.

The trees were felled during the winter maintenance programme after they were found to be dying and also draining moisture from the ninth green.


Eaton golf club member Jim Cook with the slice of tree with the golf ball embedded in it
Their removal is the first phase of a programme to reshape the area behind the green by extending a bunker, new tree planting and the creation of some mounds.

Woodland management has also been carried out elsewhere on the course, continuing the work that helped Eaton win an English Golf Environment Award in 2005.

“We are keen to expose the really mature oaks which we have on the course,” said Johns. “We have some magnificent oaks which have been 'lost' in the middle of wooded areas. By thinning out we have been able to make a feature of them.

Notable clearing has been carried out on the right of the third hole while the removal of two pines has created an avenue of oaks leading to the elevated sixth green.