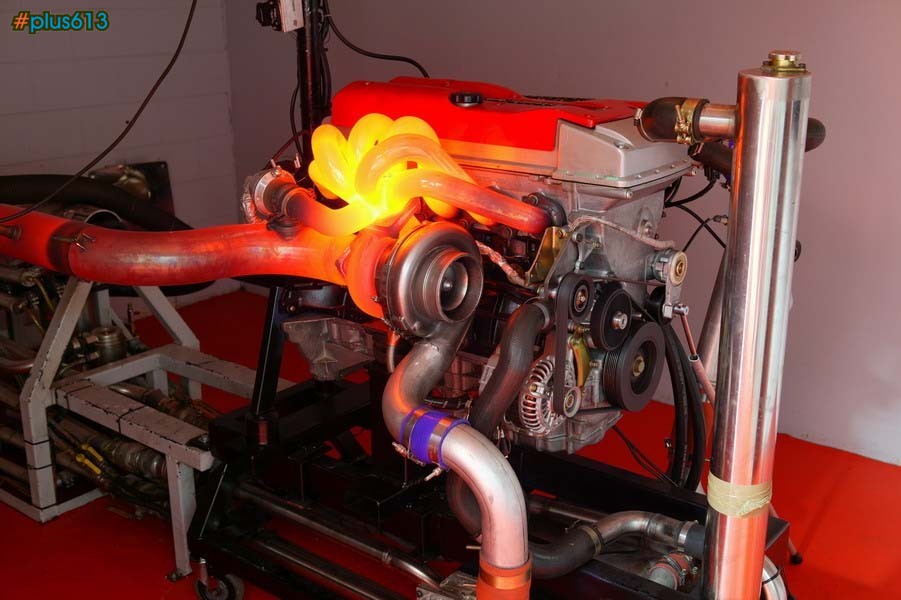 Nah man, but one thing I can say for sure is the mixture looks pretty rich as if the excess fuel is actually combusting in the turbo and exhaust. Though it could also be from a really lean mixture, I doubt that would lead to the results we see here. Though the cast iron turbine housing can take this Ok, though not for too long (and the heat transferring to the compressor housing is heating the intake charge to the point it's killin the efficiency of the compression effect), the exhaust tubing, unless it's stainless steel can't take much of this type abuse before it will begin to crystalize and simply begin to fall apart in chunks ... been there, done that

Not too likely it's a Mitsu fossil. Mitsu prefers a V-6 instead of the inline layout, which to me is a poorer choice as a straight 6 has a potential for a much stronger bottom end assy than a V design can match. The only justification for a V-6 design is that it can be shorter overall than a staight 6 can be.

And ... as odd as it seems although Mitsu always built their flagship model sports cars over the years with V-6s of 50% larger displacement than their hot rod 4-bangers they've never once taken top honors at the yearly DSM drag race shoot out held in Ohio

My best guess (and it's only a guess) would be it's either a Nissan or a Toyota as both manufacturers use a straight 6 design.

Just PLEASE tell me this isn't a damned push-rod motor! I'm hoping the aluminum housing I see on the front end of the motor houses a cam chain and drives an OHC head and not an OHV arrangement

Should have remembered berto was from NZ's West Island - might have thought of the Ford myself if I had.

What is a ford doing with a red cover on it? That's Holden colours!

Yeah the Aussie made Ford motors are actually pretty good with DOHC standard. It's the Holden (GM) motors that still use pushies.
woberto Report This Comment
Date: October 02, 2012 10:36AM