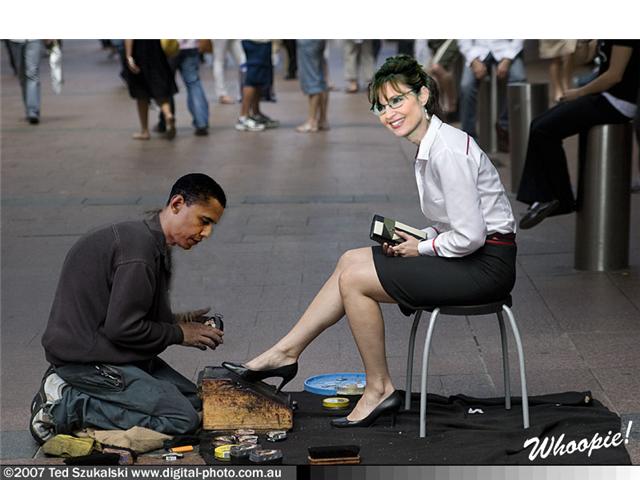 Hope your stocks are soaring thanks to all that Republifuck deregulatory horseshit people like you enabled for the last thirty years.......

I believe Abortion Protection is to be implemented before having a Prez Race ! I am a Social Leftist who will become a Dutch Citizen ! I've been called by " Righteous Louts " for backing Dutch Euthansia ! It's Legal in Europe ! I don't want to be called a Murder for someone on the Right : DIED ! TOO BAD ! I am not a Murderer or War Criminal become of this utter nonsense by some : DUMB CATHOLico ! I believe Doctors should perform a Universal Abortion to : Anyone as Woman or Two Organed : Wants It ! What does EL AVERY : WANT ? Supporting shooting Abortion Doctors and shooting US , too ? Write to : US CONGRESS SUPPORT CONSTITUTIONAL ABORTION PROTECTION ACT Washington , D.C. USA ATT'N : MASON & SUSAN BLOCK PARTY
FrostedApe Report This Comment
Date: September 24, 2008 03:50AM

I just can't tell. Could easily be a combination of all of them, too.

Hope your stocks are soaring thanks to all that Republifuck deregulatory horseshit people like you enabled for the last thirty years.......

Ok, now I get it. Too few real facts to relate here so your choice instead is to simply spew more disaccociated illogical blather onto another page here, nice.

Might I suggest some reading to better round out your distorted sense of fiduciary history before planting your foot squarely between your chops again.

The current financial industry collapse has many roots while one of the most direct causes comes from banks being required to maintain hundreds of millions of dollars in available funding for lower income and 1st time buyer programs, essentially forcing banking groups to accept loan applicaions by folks who were either completely uncredit worthy or at best poorer credit risks than sound lending practices would otherwise allow funding loans for.

The result, as a high percentage of these mortgages resulted in default by the lendees, then in turn causing the lenders to not only lose the expected income from servicing the loans, but also then incurring additional losses as they then were required to instigate foreclosure proceedings against the lendees in default, which in many cases led to the owners then damaging the properties on their way out, while when again many other vacant properties were then vandalized and often hit by thieves ransacking the now unprotected properties as they stripped them of the wiring and HVAC units and materials, basically rendreing them totally unsaleable without massive reinvestment for contractors to repair the properties.

Then, many of these same crafty thieves simply sat around waiting until the homes were repaired so they could strip 'em again and head off the the scrap yard with their materials, causing many properties to require reconstruction multiple times, implementaion of additional security investments in guards, fencing and such in an effort by the lenders to protect their seriously diminished and dwindling investments.

After having made all these investments to these defaulted properties in hopes of making them again saleable to recoup some of their losses, they now had to often offer them at prices lower than what was originally loaned on them, effectively once more diminishing their investment as the market had now soured with all the foreclosed propeties flooding the housing market, causing overall housing prices to drop from the market glut, further increasing the net losses to the lenders, who still were expected to keep making further loans to those deemed as likely to only again default on their loans.

The question you are probably asking is (or if you have enough brain cells to still be capable of formulating such things, at least should be), so where did this all start? One only needs to look no further than the democrats darling and hero Slick Willy to find the answer to that question.

So, next time you wanna run your trap and spout more BS, best arm yourself with a bit more real knowledge of what's up 1st.

But .... maybe the taste of the soles of your feet is something you've come to enjoy. If so, then carry on, but don't expect folks to buy into your BS, or at least not without expecting real logical thought and query to be requested when you do

Thanks for the info MrKim

Is it just me or does anybody else thinks all this Wallstreet shit going on just before the elections is just coincidence (rotten) ?????

Well it is a good thing I sold my house when I did even though I took a $40000 loss. I just hope the banks don't fold before I can find the house I want to buy with the money I have in a money market account waiting.