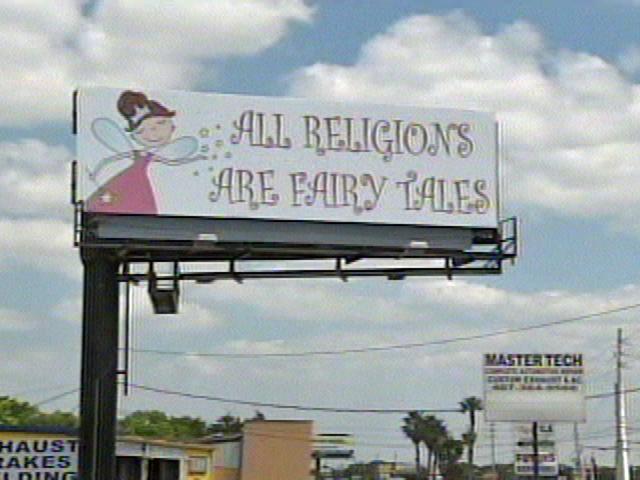 Wonder how long it'll take one of the fairy elves to tear this billboard down or at least DEMAND its removal??

You're right about that mrkim.I seriously doubt this is in orlando,the city does not put up with any billboard b.s. as we are a mickey mouse tourist city

The right to free speech often ends pretty abrubtly when one chooses to target religon utilizing such a freedom. Particularly amusing in a country where the division of church and state was so vehemently stated in our founding documents.

But ... if the sign were erected without knowledge or payment to the sign company (as was stated in the article) then no rights were violated anyway.

I think myself and all fellow athiests should petition for minority status, perhaps then we'd actually have some rights relative to our philosophies regarding theology. As it stands today we are a highly mistrusted and extremely maligned diminuative segment of the population in the US. Hell, even Muslims are held statistically in higher esteem and regard than are athiests. And all because we don't have imaginary friends ....

MrKim, in europe we have the Humanist Society so that people who do not want to be labelled heathens or muslims (my gf's parents description of me) can join a non religious organisation that places human kindness over fairies and demons. Have a look, I am not a member, yet, I'm waiting for my gf to get a thing saying she has left the church so we can join together.

Humanism is a progressive philosophy of life that, without theism and other supernatural beliefs, affirms our ability and responsibility to lead ethical lives of personal fulfillment that aspire to the greater good of humanity.