This is me with my buddies. Im on the right. 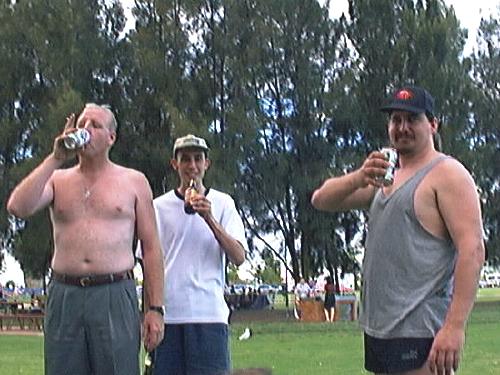 not me but this is closer than any pic you've posted of me spammer....you probably look like the dweeb in the white shirt drinking the metrosexual beer
Jude Report This Comment
Date: October 25, 2004 05:33PM

Omg and you sound quite proud you look like a fucking fat looser fuck me thats good. Ha what a prick!
ho\'sbro Report This Comment
Date: October 25, 2004 06:39PM

jude are you an idiot?....since when did being chubby make you a loser....i know people a lot fatter than me that make enough that by the time they retire they will be millionaires....if your way of thinking were true the people of Africa and India would all be potential movie stars....in America the bodytypes admired by most are the preferrable ones that excel in sports ....the guy above with a little working out could be a great lineman in football (not soccer football) and the truth is he would probably whip your scrawny ass mano a mano...not proud but not ashamed to be a little overweight but at least I'm not a dumb fuck like you...finally it's loser not looser... as in "if your momma was any looser you woulda fell out".
Jude Report This Comment
Date: October 25, 2004 06:49PM

So easy you must be very shallow. What a fat LOSER!

jude ...you mean shallow like your gene pool?....last time I looked shallow meant being worried about looks, money or weight....you seem to fit that bill....what a skinny, shallow imbecile!....and yes mint he did spell it right this time ...either you can teach an old dog new tricks or he's just a pup.
katalyst Report This Comment
Date: October 26, 2004 12:41AM

loopson ...thats your opinion and you know what they say about opinions.....opinions are like assholes, everybody has one and most of them stink....there is so much worse on the scum-meter....try corporate big-whigs living offa the sweat of the middle class, how about politicians giving big business a huge say in government, and then there are people like you that hate before they know.....redneck is not about being racist to most rednecks....its about accepting southern, working class values and morals and trying diligently not to sway from them....I know where the term originated and I'm sure you'll wanna come back at me with that(in slavery day's the indentured servent was usually white [scottish or irish]and in control of the slaves in the feild and he got a nice red neck from being in the field all day...but in terms of the way debt was collected in those days he too was a slave) but the term has evolved since old days....what's probably saddest is that a lot of the people you call Scum of the Earth have more morals in their pinky toe than you have in your whole body....most rednecks regret the sins of their father's...and if you wanna involve my ancestors in it you got no ammo, they came over during the great potato famine in the 1890's....we were as hated as the blacks for our religion...the KKK strung them up or burned down their houses and ran them outta town too
meho Report This Comment
Date: October 27, 2004 11:24AM

meho...read the text and get your facts straight before you comment...butt munch
DM USMarine Report This Comment
Date: October 29, 2004 08:12AM

Ho'sbro - They are just trying to push your button and it seems to be working. Dont reply to their stupid comments. They sound like kids anyway, probably up past their bed times.