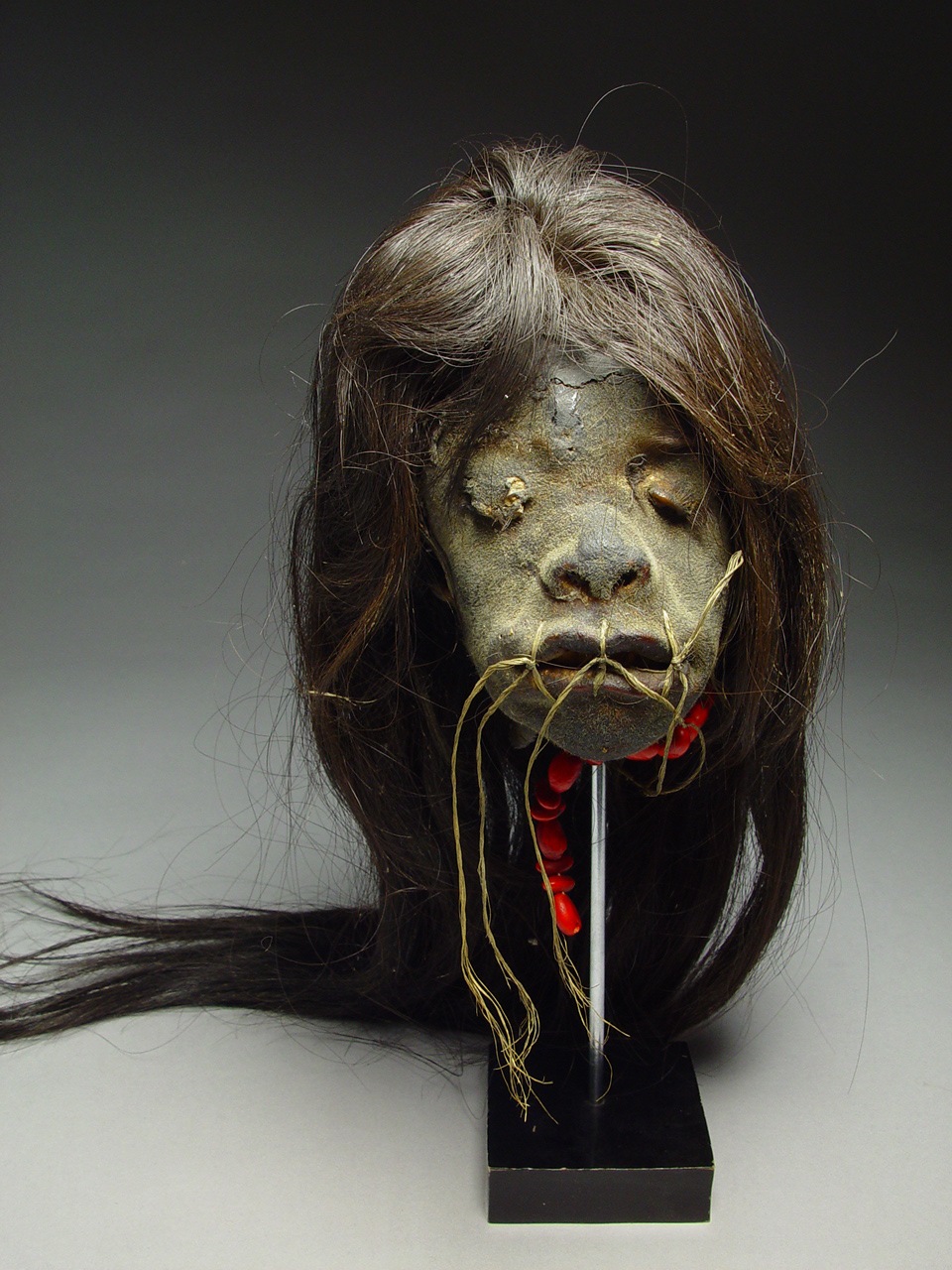 A genuine, authentic Shrunken Human Head, prepared in the late 19th century or very early 20th century.
Head hunting has been practiced since time immemorial. The prehistoric Celts in the UK used to cut off the heads of their enemies and preserve them in resin. They would then boast their exploits in war by showing these heads off to their friends and important visitors! Greek philosophers such as Plato and Strabo, wrote about the customs of the Celts many centuries before the birth of Christ.
Human anatomical trophies have also been common in history:The Head of Goliath in the Bible; rumours of human Ear collections abound, some as recent as the war in Vietnam! However, it seems that the only people known to have shrunk Heads in recent times are the Jivaro Indians who inhabit Ecuador and Peru rain forests, around the Amazon. The Jivaro called the heads Tsantsa, and they were trophies in much the same way that Scalps were to some North American Indian Tribes.
Jivaro tribes constantly fought each other, to avenge some real or imagined wrong.Their raidsfurnished wives and booty. Heads were decapitated as part of blood revenge. The Tribes believed that the death of a relative had to be avenged with the death of the killer or relative of his. They believed that by making a Tsantsa from the enemy's head they would satisfy the spirit of their own relative. This was imperative because the Jivaro feared the spirit of their ancestors mor than their enemies themselves....Shrinking a Head involved a very elaborate ritual, perhaps first observed by the explorer F W Up de Graff from our civilized world. In 1897 he witnessed a Javaro raid: Having killed the people in a neighbouring village, they started chopping the heads off the fallen. This included a woman who was still alive. This proved hard work for the savage who was using a stone axe, until he borrowed Up de Graff's machete! The raiders then carried the heads back to camp on a strip of pliable bark passed through the mouth and out through the neck. The entire tribe then celebrated with a series of ritualized drunken revels, where large quantities of wine and narcotics were consumed. The preparation of the head entailed a dorsal slit enabling the skull and its contents to be removed. The soft tissue of the face and neck was then boiled in berry juice until it turned brown and leathery. The facial hair was singed off and the skin and internal tissue polished. The dorsal incision was then stitched up with jungle fibre. The end product was a human head that had shrunk to a third of its normal size. The Tsantsa was then worn round the neck by the executioner and paraded round the tribe for insults. The lips were stitched up with jungle cord to prevent the spirit of the deceased from escaping and causing harm. Once the ritual was over, the tsantsa was perceived as having no power. It was therefore either fed to the pigs or given to children to play with. Morbid European facination was such that merchants started buying these Santsa from the natives - the exchange used to be one musket per santsa. This prompted the Javaro's to go out deliberately to kill and prepare the lucritive tsantsas. In fact the western appetite for such savage memorabilia grew so much that fakes flooded the western markets! One doctor in Panama who learnt the method of shrinking from the Jivaro, was actually said to have shrunk two complete bodies, one being a child - the finished specimen being a few inches long! Corpses were plundered from the unclaimed in morgues, and their heads turned into valuable Tsantsas. There is a comprehensive check list for authenticating genuine Javaro tsantsas, and the head offered here has fulfilled such vigorous scrutiny. Among the features looked for are: long hair; no facial hair but nasal hair; lips stitched with jungle cord; a scar at the top of the head for suspension round the neck; a sealed saggital and dorsal cut; brown discoloured skin; a human shaped ear, but 1/3 of the normal size. Predictably this savage custom earned the Jivaro an attrocious reputation amongst westerners. As a result ironically the Jivaro were never conquered by the Inca or the Spaniards. In 1599 the Jivaro brutally slaughtered 25,000 Spaniards; the latter subsequently left them alone, declaring that they were more cruel than Nature herself. Their ferocity therefore had the advantage of enabling them to maintain their independence and traditional way of life, long after most other Native American tribes had come under the thumb of the Europeans. It is said that the Jivaro no longer shrink heads, but nobody can be certain. What is in no doubt however, is that today they are threatened by European Christian Missionaries and Land hungry Settlers. Perhaps eventually the Jivaro will end up selling souvenir heads made in Taiwan!!! The Specimen:
Has typical long straight black hair. The facial hair has been burnt off. The lips have been stitched up with jungle cord. There is a scar at the top of the head where it would have been suspended around the neck. There is a sealed up dorsal and saggital incision. The flesh is brown and discoloured from boiling. The ear is human in shape and one third in size. The specimen wears a red bead necklace.
Height of actual Head: 4 1/4 inches.
Height on plynth: 9 3/4 inches.

Today's barbarians just strap on bombs and blow themselves up with as many members of the other "tribes" as possible.