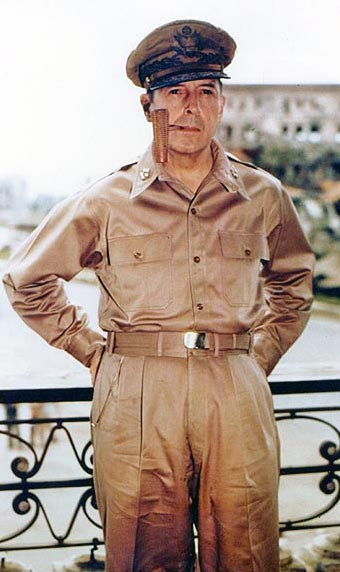 Douglas MacArthur (January 26, 1880 – April 5, 1964) was an American general and Medal of Honor recipient, who was Supreme Commander of Allied forces in the Southwest Pacific Area during World War II. He led the defense of Australia, and the recapture of New Guinea, the Philippines and Borneo. He was poised to invade Japan in November 1945 but instead accepted their surrender on September 2, 1945. MacArthur oversaw the occupation of Japan from 1945 to 1951 and is credited for making far-ranging democratic changes in that country. He led UN forces defending South Korea against a North Korean invasion in 1950-51. MacArthur was relieved of command by President Harry S Truman in April 1951 for public disagreements with Truman's policies.

MacArthur fought in three major wars (World War I, World War II, Korean War) and rose to the rank of General of the Army. MacArthur remains one of the most controversial figures in American history. While greatly admired by many for his strategic and tactical brilliance, MacArthur was also criticized by many for his actions in command, and especially his challenge to Truman in 1951.

Unknown to most, MacArthur was also a flaming homosexual. You can see in this picture the symbolic "pipe-smoking" behavior he used in public as a substitute.