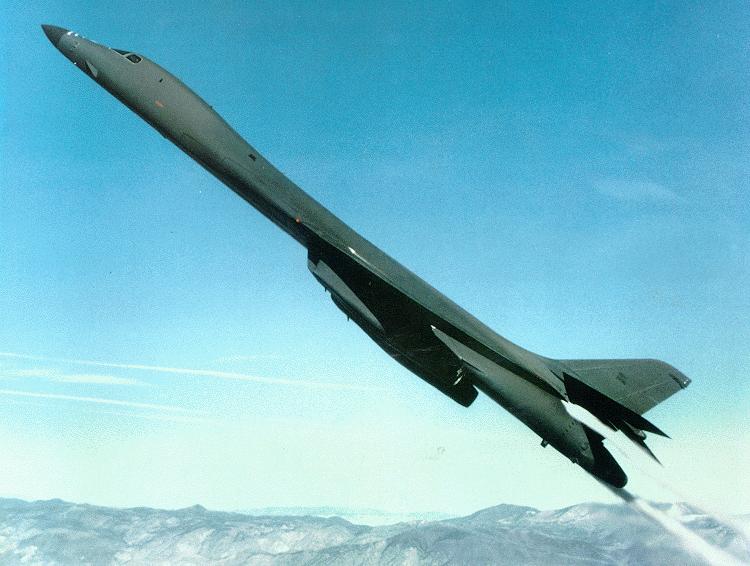 A story from a U.S. Marine somewhere in Afghanistan:

"So we are up in the mountains at about 1400 hrs looking for some bad guys that we knew were in the area. Here are ten of us, beautiful crystal clear day, about 25 degrees. We know there are bad guys close by; a few shots have been fired but no big deal.

We decide that we need air cover and the only thing in the area is a solo B-1 bomber. He’s flying around at about 20,000 feet and tells us there is no other planes in the area.

He then asks if we would like a low level show of force. Stupid question. Of course we tell him yes. The controller who is attached to the team then is heard talking to the pilot. Pilot asks if we want it subsonic or supersonic. Very stupid question.

Pilot advises he is twenty miles out and stand by. The controller gets us all sitting down in a line and points out the proper location. You have to picture this. Beautiful day, ten Marines sitting down, dead quiet and overlooking this about 30 mile long valley.

All of a sudden, way out (below our level) you see something moving at an increditible speed coming at us. The controller says, "Ah-- guys-- you might want to plug your ears". Faster than you can think a B-1, supersonic, 200' over our heads, blasts the sound barrier and it feels like God just hit you in the head with a hammer". He then stands it straight up with 4 orange trails of flame coming out and disappears."

Now try the same shit with an SR-71 at full burn 200' off the deck...guarantee those guys would have been sucked off the ground!
ToucanSam Report This Comment
Date: January 10, 2006 05:26PM

Here's another intresting read. My bro in Iraq had a pretty good holidays, didn't get shot at till new years day. Had an RPG blow up about 12 feet (less than 4m.) from him, and it was no fun and sucked a lot. Every one was ok. There busy as hell. At LEAST ANOTER YEAR OVER THERE. over...