ONE MILLION VIEWS ON PLUS613.COM! 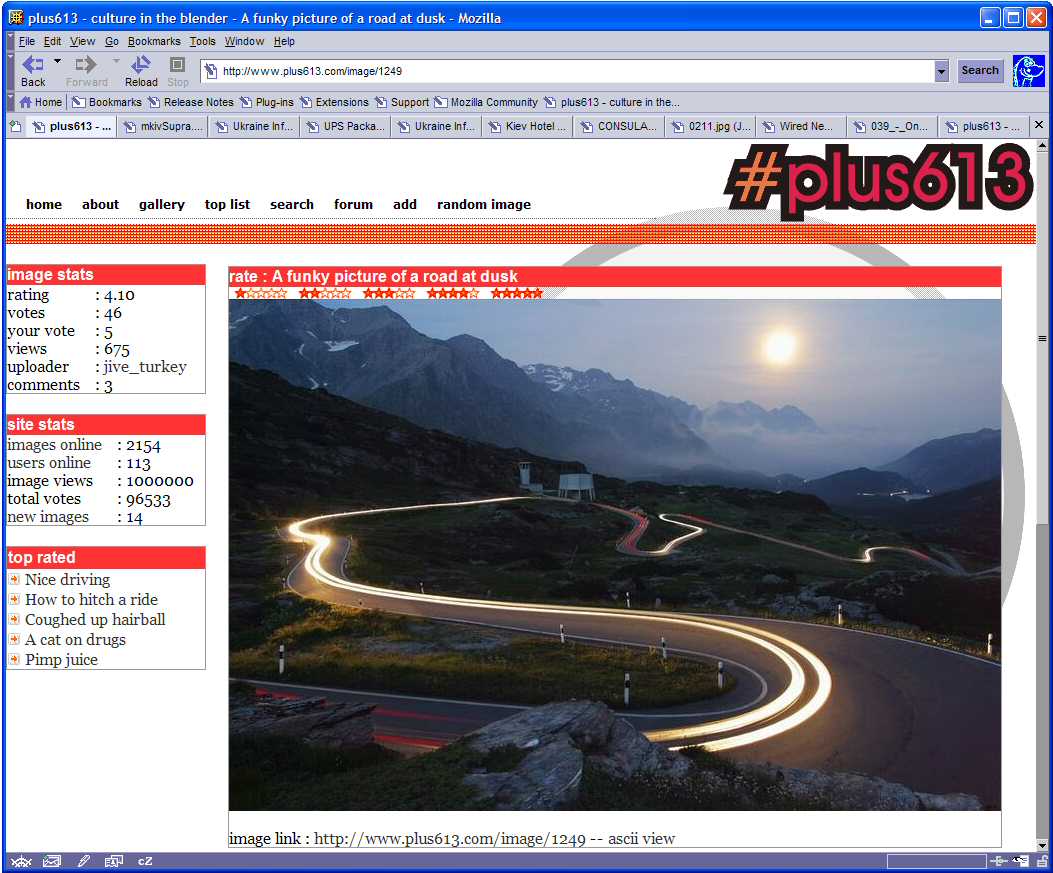 With 113 people witnessing the event, today at 3:49pm BST (2:49pm GMT) www.plus613.com broke one million image views! This has been a bit under 7 months in the making from a completely virgin website with absolutely no content, yet 3/4 of those million views have occured within the past 2 months and 10 days. If we can sustain this rate of increase, we will hit 5,000,000 views before the year is out.

Current highest number of unique visitors in one day: 2782

Most bandwidth used in one day: 2.2 gigabytes (that's approximately 1,527 3.5" floppy disks, which if stacked one on top of the other would reach nearly four meters (roughly 13 feet) in height!)

Statistical busiest day of the week: Tuesdays, with an average of 15,948 page views.

Average number of visits, per visitor, per month: 1.4+

Estimated number of people who add www.plus613.com to favorites: Over 50%

We are extremely proud of how far this site has come in just these few short months, and we would like to thank all the users who have been browsing our website since October when it was launched. We hope you'll come back again soon as we head towards five million views and beyond!

i think i re-posred this one. A reliable source informs me...
Plus613.net has the estimated value of $5,463 and ranks # 563,960 in the World (Alexa).
With the daily ads revenue: $6 and pageviews per day: 298.
The website is hosted on server that locates in Fort Lauderdale FL United States.

Means we're heading to 200 million, will easily do it before the year is out.

The stats above, and in the 250k image, were before the sites were split. The view counter itself is accurate to +/- ~100k views at a guess. This is because I don't think deleted images show up in that tally after they're removed. It's pretty accurate though.

Facebook and the like took a pretty serious toll on sites like these. Also, losing our listing in DMOZ because of the domain name shit really hurt us. We used to have 1000+ online at all times, now it's usually around 200 and half of them are bots.

If the demand/load had've kept up we'd probably have spent a lot more time updating/maintaining the site and it'd be something really special. Ho hum

God knows how much bandwidth etc all those stats are long gone.

We have Pepsi in the fridge at the moment.

Normally it would be Coke Zero.

Lost some cool users along the way. Disappointing really in a lot of ways. You can clearly see how much things have slowed down when we took 2 years to get 1/3 of the way to that tally and it's been 10 years since then. As I said above Facebook et al, social media in general have just destroyed sites like these.

Just ask Yahoo. Or Lycos. Or Altavista what happens when they don't keep up with the shiny new.

Over 350 million images from the tiny little websites started by a couple of guys who were bored one day.

Shame it's no imgur or reddit but meh whatever, who needs millions when you can pay for it all by yourself?

"t's that time again.. time for a new Featured Image!

It goes without saying that choosing a Featured Image is always a difficult choice. With nearly 60,000 images to choose from, and only one to choose for a whole week, you need to try and choose something special. So here it is. It's one of mine!

This image was uploaded by me, and suggested by fossil digger. This image celebrates the 1 million image view on plus613, and charts the history of views on the site to the recent 100 million milestone. So, it's nice and fitting. That's nearly one IOTW per year on average so far recently! I'm sure everybody is impressed. So without further ado, enjoy this update."

gosh, I sure hope this one stays up a whole week before it's replaced...

i try to click "pimp juice" every time i "view" this one.

So how long until 200 million?

That screenshot must have been when you were planning your trip to th reactor?
fossil_digger Report This Comment
Date: October 27, 2017 10:01AM

Yup looks like it. I don't think you could pop tabs out in those days, and those were pages I couldn't lose! I can see the consulate details I had to contact for the visa, I don't know why I bothered searching for hotels in Kiev as there was like 2 that westerners were permitted to stay at back then.

Ah and my old Supra forums. I miss that car.

So yeah I can date that just by the websites to April 2004. I landed in Kiev on the 26th from memory, so this was a few days before I left. I vaguely feel like the UPS package I was tracking was my passport back from the consulate..