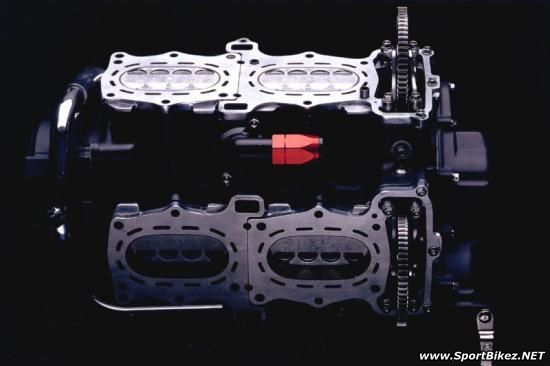 This was, for all intended purposes, a thinly disguised V8. Imagine the engineering required to manufacture piston rings for those oval pistons!
Anonymous Report This Comment
Date: October 24, 2005 04:55AM

i like how it has two con rods per piston - but yeah totaly a thinly disquised v8
Anonymous Report This Comment
Date: October 24, 2005 04:23PM

But its a thinly disguised v8... surely that must count for something.
ToucanSam Report This Comment
Date: October 25, 2005 08:48PM

because it's cooler when it's thinly disguised.
Anonymous Report This Comment
Date: October 26, 2005 05:30AM

They couldn't build a V8 in the racebike this engine was developed from, because FIM rules (at the time) said that GP bikes cannot have more than 4 cylinders. Honda sidestepped that little problem by creating a V8 with "siamesed" cylinders, which was technically a V4. I was a technical writer for the industry at the time, and was "close" to this project when it was being developed...so have all the fun you'd like with my description....It's been printed hundreds of times.
ToucanSam Report This Comment
Date: October 27, 2005 04:53PM

If they where going so radical, why didn't they do the same with the valves? (8 v. per cyl. :-O)Gear driven cams? DOUBLE overhead?
Anonymous Report This Comment
Date: January 03, 2006 05:29AM


only allowed 4 cylinders? very strange, ive seen a prototype yam that was a 5 cylinder 500cc. ure confusing the capacity reading with the overall veichile weight allowances.

the reason honda thought this up was to have a viable 4-stroke alternative in the 2-stroke (stroker) dominated race circuits of the late 70's! as honda has always been the 4-stroke japanese pioneer, they never liked using stroker technology in their rac bikes. the idea of using the oval pistions was to get the same capacity (all bikes limited to 499cc) as the strokers, but have the equil power output! as 2-strokes upto 750cc are clearly more powerful, lighter, easier to produce and quicker, they have always been the superior engine compared to the dull, slow, heavy 4-stroke!!!!

by effectivly doubling the surface area on the pistons, its effective to a V8 as it has been said, now when wayne rainey pilotoed the first type in 79, it didnt work out as planned, as 3 laps before engine explosion aint the best way to compete in races haha.

so now you know :p