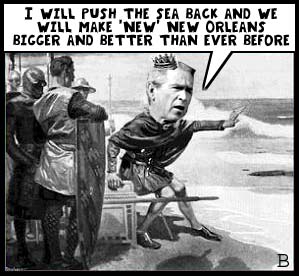 I hear he declared hurricanes weapons of mass destruction and now he wants to build a levee in Iran so he can fight them over there instead of fighting them over here.
Anonymous Report This Comment
Date: September 16, 2005 06:23PM

Even if Bush had touched a staff to the waters and they parted leaving the whole costal region dry. The people here would have just bitched he was forcing his religion on those poor oppressed black people.
slslea Report This Comment
Date: September 16, 2005 06:23PM

ABC News producers probably didn't hear what they expected when they sent Dean Reynolds to the Houston Astrodome's parking lot to get reaction to President Bush's speech from black evacuees from New Orleans. Instead of denouncing Bush and blaming him for their plight, they praised Bush and blamed local officials. Reynolds asked Connie London: "Did you harbor any anger toward the President because of the slow federal response?" She rejected the premise: "No, none whatsoever, because I feel like our city and our state government should have been there before the federal government was called in.” She pointed out: “They had RTA buses, Greyhound buses, school buses, that was just sitting there going under water when they could have been evacuating people."

Not one of the six people interviewed on camera had a bad word for Bush -- despite Reynolds' best efforts. Reynolds goaded: "Was there anything that you found hard to believe that he said, that you thought, well, that's nice rhetoric, but, you know, the proof is in the pudding?" Brenda Marshall answered, "No, I didn't," prompting Reynolds to marvel to anchor Ted Koppel: "Very little skepticism here.”

Reynolds pressed another woman: “Did you feel that the President was sincere tonight?" She affirmed: "Yes, he was." Reynolds soon wondered who they held culpable for the levee breaks. Unlike the national media, London did not blame supposed Bush-mandated budget cuts: "They've been allocated federal funds to fix the levee system, and it never got done. I fault the mayor of our city personally. I really do."

I'm sure glad 6 people out of millions don't blame Bush for this one.
Anonymous Report This Comment
Date: September 17, 2005 03:42AM

Well, Louisiana is part of red state Amerika. The idiots have no clue what went wrong.
Anonymous Report This Comment
Date: September 18, 2005 04:49PM

Thats a clear example of what the MSM (Main stream media) does, they kiss any Democrats ass like Bill Clinton, and hate any Republican President. Thats why we have the "Rathergate" and more than "10,000" dead in N.O. and if you like to find the truth you can dig up more lies by yourself.
CommanderCodyTheLostPlanetAirm Report This Comment
Date: March 15, 2006 02:35AM

Wow, 6 people were interviewed? That is an impressive survey. That is funny because most polls of the region despised Bush.
Anonymous Report This Comment
Date: March 15, 2006 02:48AM