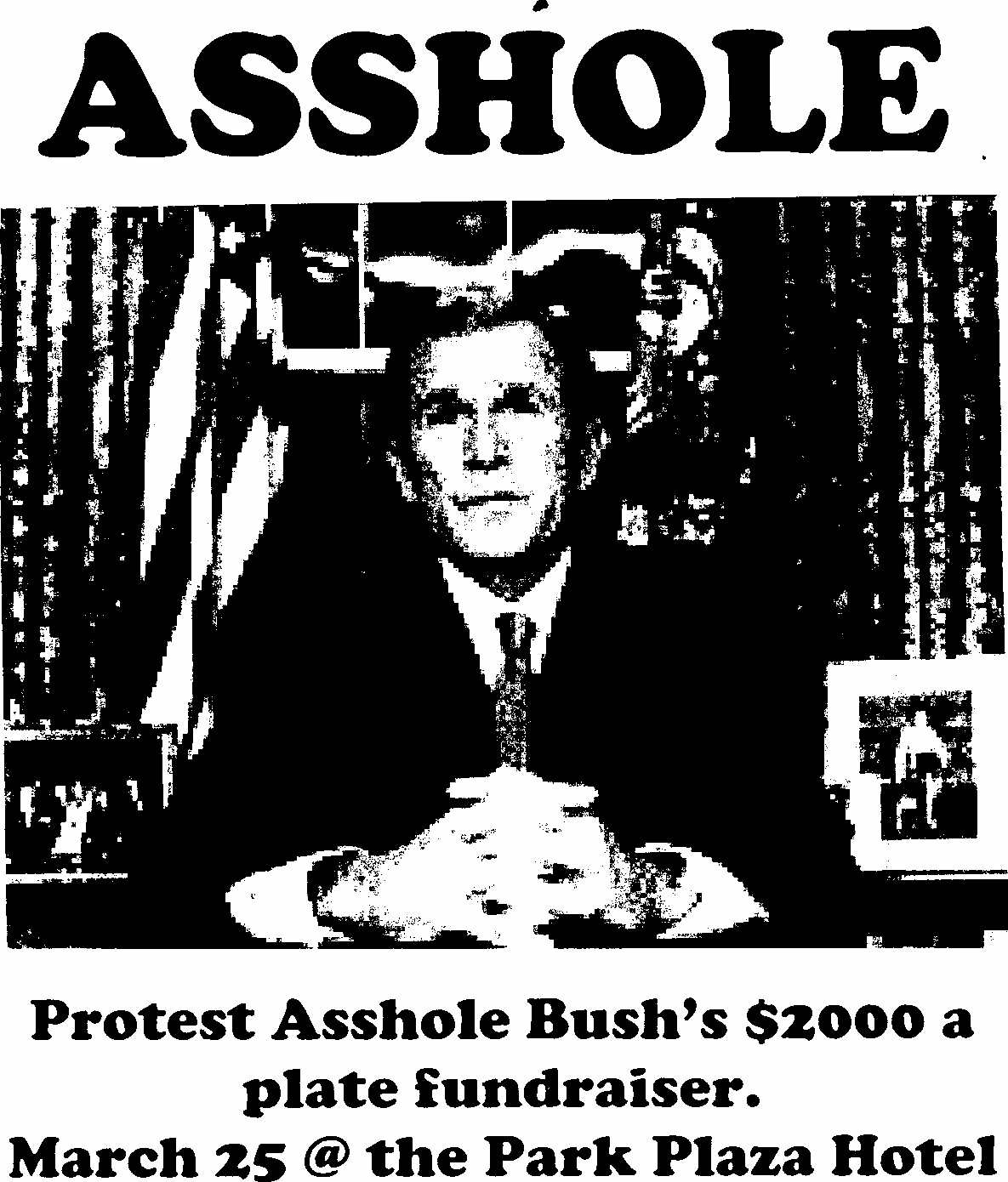 I assume when he says asshole, he is talking about himself, cause hell even from here, I can smell an asshole. First time I seen one sign his work like that, oh well, if he's an asshole, why not act like one!!
madmex Report This Comment
Date: July 23, 2005 04:54AM

bush is a oil billionare fag. who gives a fuck about wat he ripping this country off for.you doent seem to care. Why shouldn't he gett filthy rich , him and all his friends. hurray for the right wing ,rednecks and jesus nutts and You. he couldn't have done it with out you. You will be remeberd as the generation that gave up your freedom FOR SECURITY. Pussy ass
duane Report This Comment
Date: July 23, 2005 11:17AM

Little Bitch,I would vote for him again in a second over what your crazy assed nominee would have been.
madmex Report This Comment
Date: July 23, 2005 03:40PM

yeah ,you watch too much TV.Too much reallity tv. Kerry was slightly better than bush.He actualy had a comfirmed kill in vietnam. Thats all i cared about.Bush got YOU and the country terrified over a few sandniggers. The patriot act takes away freedoms that your grandparents fought and died for.
Good job pussy ass. Bush will protect you from the evil boogyman. O yah watch the news and see how much money the oil industry made. There laughing all the way to the bank.
madmex Report This Comment
Date: July 23, 2005 03:46PM

power percieved is power achieved. people will follow.
he who owns the gold will rule the world in his image.
united we stand,Divided we will fall. 50% republic 50%democrate. no chance............

Why dont you lick my pussy ass dipshit.Its cocksuckers like you who fall in the lower IQ range that fail to realize your a fucking kook.Wow a confirmed kill,I wonder who the woman or child was he killed.Thats his words not mine he came back and addmitted to a bunch of fucking attrocities and blamed his fellow soldiers and said they were all guilty.He did all this while POW's were dying in prison camps because they would not turn theyr'e backs on the country.You dont have a clue,I am a former soldier and it insults me that he breathes,hes no more than an oxygen thief and he furthered his political career at our countries expense.Eat that pussy mother fucker.
Anonymous Report This Comment
Date: July 24, 2005 01:50AM

I don't think the President is an asshole, but he's not the brightest bulb in the box, he's just a puppet. Now Carl Rove seems like an asshole!
madmex Report This Comment
Date: July 24, 2005 06:08PM

i agree with everthing but the kook part. LOL. But i still would have voted for JK . Bushes ageda is Freedom on the March. Freedom for Corprate America and Exxon,Enron,Carlyle Group, and the war industrie that you so eagerly serve. You just do wat your told ,Tho no less honarable than your efforts might want to be.
The lesser of two Evils was ,my only choice this past election. I vote with my wallet , and lately my bussines expense's are triple.