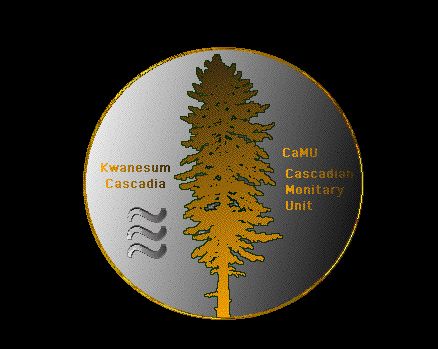 This was designed as a virtual currency like the European Monetary Unit (EMU) before the introduction of the Euro. THe EMU was used as a symbol of conversion between different currencies in the European Economic Community. It was used to psychologically and symbolically unite Europeans. The CaMU should be a symbol of the economic health and ecological sustainablity in a bioregional Cascadia. Cascadia is the bioregion of the "Pacific NorthWest" from the Panhandle of Alaska to Northern California and from the Pacific ocean to the western slopes of the Rocky Mountains. This is an international bioregion that transcends nation-states like Canada and United States just like the Great Lakes is shared administratively by the same two nation-states.

YEP,
sounds like a load of shit to me,too

actually I like it. And the fact that I bet dump ass 'Mericans hate it means its good!
Anonymous Report This Comment
Date: June 30, 2005 03:33PM

You'd think the designer would have checked the spelling of =monetary=.
Daizee Report This Comment
Date: July 01, 2005 02:47AM

Actually the spelling of monetary as monitary is often the European spelling. Just like grey for gray or colour for color. I think that the artist intended to break from the US re-spelling that was intentionally done in the 19th American nationalistic schools to create a distinction between the British empire and the USA.
Anonymous Report This Comment
Date: July 01, 2005 03:00PM

That's complete bollocks, Daizee. It has never been spelt =monitary= in English. Consult a dictionary - the OED doesn't even list it as an alternative. You may have mangled many of our words but that one's original.
Daizee Report This Comment
Date: July 01, 2005 08:09PM

Do a search on the internet and see how many European institutions have the word "monitary" as part of their name.
Anonymous Report This Comment
Date: July 01, 2005 09:26PM

...yes, and the first thing Google asks is "Did you mean to search for =monetary=?" Just because some idiots spell it =monitary= doesn't make it right. This is the same argument used at the end of the millennium, when cretins all around the world celebrated a year early and even most governments went along with it. I guess they realised there's no point in arguing with a fool.
Anonymous Report This Comment
Date: July 10, 2005 09:48AM

what a jerk to fight over spelling. sounds like a power trip to me.