The Bioregional Commonwealth of Cascadia 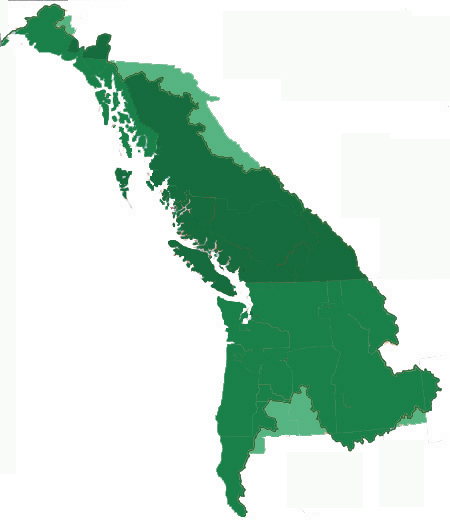 obviously you could not give a fuck you bonelees sausage head. I bet you are Amerikan you freak!
Anonymous Report This Comment
Date: June 28, 2005 08:40PM

It is spelt with a "K" to indicate thiat is it a fascist rule country, you Dork. Ok I will spell it the other way with three "k"s to indicate its racist policies "Amerikkka"
rogue_1 Report This Comment
Date: June 29, 2005 11:18AM

Its not what? Shithead! Your phrasing of the question reflects the stupidity of the Amerikkkan educational system or should I write lack of education in the Amerikkkan educational system. It is where? Cascadia is a bioregion located in what Atlantic-centered imperialist call the Pacific NorthWest ... just like the Greak Lakes is a bioregion, Cascadia transcends political borders.

Cascadia is geographically the Columbia River Watershed & the area around the Cascade Range. Cascadia’s farthest extent is from northern California to the Alaskan Panhandle & from the Pacific to the Continental Divide. Cascadia Minor tends to be the states of Northern California, Oregon & Washington with the province of British Columbia. The Scottish naturalist David Douglas named the Cascade mountain range after the powerful waterfalls that carved out this land & gave it so much biomass. J.M.R. Le Jeune's "Chinook Rudiments" published on May 3rd 1924 describes the geographical placement of the use of Chinook Jargon (Chinuk Wawa) and a partical glimpse of the demographics of who were the Chinook Jargon speakers of the time:

"Chinook, for a century the International Language of the Pacific Coast, from Northern California to Alaska, from the Pacific Ocean to the Rocky Mountains."

"Gradually took shape between 1790 and 1810, becoming t(h)e necessary means of intercourse between natives of twenty-seven different tribes speaking as many different langauges, as well as between natives, whites and orientals."

. In the 1840s the European settlers in Oregon Territory created their first "western style" government as a Provisional Government. George Abernethy was elected its first and only Provisional Governor, but the opposing "party" led by Osborne Russell favored Independence. Russell proposed that the Oregon Territory not join the United States, but instead become a Pacific Republic that stretched from the Pacific Ocean to the Continental Divide. Many favored the idea of Independence (especially north of the Columbia River).

In the mid 1970s Ernest Callenbach envisioned an emergence of environmental awareness that would lead the Pacific NorthWest to form the country of Ecotopia. The 1990s David McCloskey formed the Cascadia Institute. McCloskey describes Cascadia as "a land of falling water". Historically a nation is a group of people with common symbolism such as language, culture, religion & etc that unify them as a group. The group identity called nationalism emerged out of the Industrial Age as a new form of political group identity & as a result has became chauvinistic in many respects to any other form of group identity. Nationalism with all its chauvinsim has become yet another stumbling block to finding harmony between people & Nature. As an emerging identity "Cascadian" may evolve into a "nation", but the terms "national" & "nationalism" are limited & chauvinistic in their regards to the Cascadian love for diversity. This new approach to identity through diversity in thinking, in human experience & ecology is bioregionalism. "Bioregions are geographic areas having common characteristics of soil, watershed, climate, native plants & animals...A bioregion refers to both the geographical terrain & a terrain of consciousness -- to a place & the ideas that have developed about how to live in that place." Peter Berg. If Cascadians should ever awake to the ideas of creating an autonomous political entity on the global political area then hopefully Cascadians should never seek the nation-state model, but instead have the insight to embrace the model of diversity as a bioregion.

Cascadian love and valueing of our home (Mother Earth/Mother Nature) is reflected in many of the old policies of "Land Use Laws" in Oregon in the 1970s under Governor Tom McCall. In the late 1960s into the present many Cascadians born in the region hated the fact that suburban Southern Californians invaded Cascadia bringing the problems of urban growth with them. In many ways the resentment of suburban sprawl and the "Do not Califorinate" movements can be traced back to attempts to protect the Redwoods and surrounding environments in Northern California from the onslaught of "white flight" from Southern California’s urbanization and racial tensions. Many Californians during the rise of anti-Californianism have attributed Oregon’s, Washington’s, Idaho’s and Montana’s hostitility as racist and homophobic. But the reality was often the opposite with the suburban sprawlers using claims of racism and homophobia as a smoke screen for the fact that they were actually fleeing modern urban issues which often tended to be racial and gender based issues wrapped around economic elitism. This is not to deny a history of sexism, racism, classism and other chauvinsims that have occurred in the Pacific NorthWest, but these chauvinisms are endemic in all of the Europeanization of the western hemosphere and rest the world. Yes we as Cascadians must acknowledge Oregon’s racial eclusion laws of the 1800s; Seattle’s anti-Chinese riots; internment of Japanese Americans during WWII; Portland’s secret segregation conspiracy by real estate agents to divide Portland by racial and economic lines; and all the manifestations of sexism, racism, homophobia, classim, anthropocentrism and all the other isms of hate that are unfortunately part of modern civilizations. We, Cascadians, must transcend these institutions of hate and create a new paradigm that is inclusive, organic and wholistic.

Cascadians must have a new approach... a new paradigm. We have two competing regional archetypes that now dominate and literally shapes our land and people. The term "Californication" became of term for fleeing of one place only to bring the same problems to another place. Californication is a form of escapism and control of the socio-ecology. Californication projects Nature and women as objects of beauty to be surgically altered if a "flaw" is found. Often that "flaw" is "wildness" without the need of "Man"; "endangerment" to "Man"; or the inablitity to maintain the outward appearance of "social norms". Californication becomes the ultimate escapism by the manipulation and reengineering of the Nature be that the engineered landscapes in the form of suburban sprawl or the cosmetic surgery to escape the low self esteem. Texasfication which envisions that archetypical Man as a lone cowboy being honest to himself. Texasfication projects women as garnish on the platter of the masculine identity. It projects Nature as a mistress to be used, raped and tamed. Cascadianism offers a new paradigm to regional archetypes: Ecotopification. Ecotopification is the realization that the environment around the self is an extension of the self and the self is an extension of the environoment. Ecotopification is not the domination of Nature nor the escapism of the natural, but is the embracing of the natural and the self reflection for internal adaptation to Nature. Cascadianism is the valuing of "Ecology, Equality and Equity" through "Respect, Reverence and Responsiblity". Ecotopification is the manifestation of Cascadianism.

These regional archetypes manifest in the power and political structures of the institutions and landscape. Texasfication manifests the idea of strong male leadership without the responsiblity "background" characters who color the storyline of the lone cowboy fighting for "justice". Those locked in the mentality of Californication look to popularity of the masses or group approval substituting majority and prestige over responsiblity and reverence of the "other". Ecotopification is a process that projects the need for reexamining democracy and creating a wholistic new paradigm that includes all called biodemocracy.

"Democracy is not voting nor does it end at the ballot box. Voting and ballot boxes are tools used in many democratic processes. Democracy is the continuous dynamic dialogue between the people, all the people!, and the institutions that they have installed and have an impact on the present, future and past."

"Biodemocracy is a system of empowerment of all the people with a fully conscious awareness of the necessity to acknowledge, include and maintain the socio-ecological fabric that is crucial aspect of the human being. Biodemocracy differs from democracy in the sense that there is an understanding that humans can not exist outside the natural world and that Nature is an integral part of humanity. Where as democracy is an anthropocentric system of colloquy, biodemocracy is a shift to an ecocentric or holistic system of empowerment and awareness of interdependent communities. Biodemocratic dialogue is inclusive to all the communities and systems that are affected in actions and non-actions alike."

Many in California, Oregon and Washington State after the US-American election of Novemeber 2004 proclaimed they wanted "Blue State Secession", but that is a limited approach to a very limiting political system that presents itself as "American Democracy". But the term "secession" in the American national mythology conjures up images of Civil War, slavery and racism. Cascadianism and biodemocracy should not be about exclusion or elitism, but inclusiveness through respect, reverence and responsiblity. The 2005 general elections in Canada has left many Cascadians who are north of 49th parallel feeling that their political imput in the continental wide nation-state is just window dressing for the political elite in Ontario. Secession in the Canadian national mythology conjures up images of the French speaking Quebec and fears of a Balkanization of Canada. In that I suggest that we, Cascadians, need to focus on "Re-Unification". Cascadians today are divided by the political borders imposed on them by outside empires and historical events that in a bioregional worldview must be transcended. We, Cascadians, are physically, politically and economically divided into states and provinces. Our political and economic involvement with Atlantic imperial institutons often puts Cascadia as merely a vassal state with superfical representation. From this history and current situation it is crucial for all Cascadians to take it on themselves to generate dialogue and even invitations for visits to learn of our commonalities and in that sense "Re-Unification".

We need to educate and create networks. We need to create networks to feed, cloth, house, educate and assist those falling to the streets. We should act now so as to build a new foundation for a new way ... a new paradigm ... one of social networks, social responsiblity, true democracy, cooperativism, ecological sustainablity and sustainable responsible economies ... a future where racism, sexism, ageism, abilitism, nationalism, classism, specism and all the other -isms of hate will become merely something we read of in history books and talk of as being in the bad old days. A paradigm where we become human beings again as opposed to human "do-ings". A worlview that sees the trees and other animals as syblings and not as property to be used for profit. Where the artist, the craftperson, the poet, the cook and all those who endeavour to create are revered as priest/esses of creativity and not as slaves to a pay check. We have an oppertunity to become something new ... something different ... a synthesis of the best of the old worlds and with a new vision of what "we" are as a species ... as members of a biodiverse network of communities on a living planet. We need an Evergreen Revolution! A revolution that is of the mind and manifests in our actions, our relations with eachother and our being part of a dynamic socio-ecological matrix.

Trust me I think I have been out more than most people. Now if you mean close my mind up and just play video games and watch "Survivor" on TV like most people do in the USA then well.. sorry not interested.