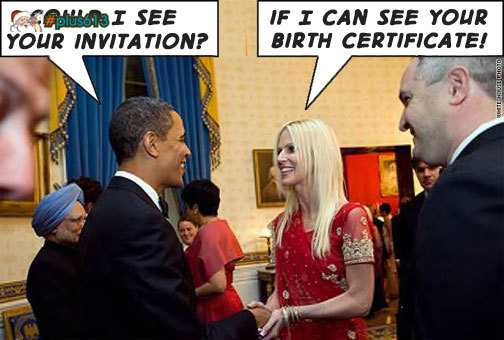 If this is such a "dead horse" issue it might ought to be explained to the puppetmasters legal team who have continued to block every attempt in court to hand over the documents that have been requested that would otherwise make this all moot. Kinda makes that "transparency" claim look a bit suspect, donchathink? <-Ooops, forgot who I was addressing .... nevermind

Similarly, why is a man who preaches "transparency" also blocking all requests to view his educational transcripts? If there's nothing to hide or be ashamed of, why should these be sealed?

If there are valid reasons for either of these actions I'd sure enjoy hearin 'em, otherwise, I'll just keep askin the same questions

Newsflash/Bush had a chance to catch Osama Bin Ladin in 2004 just like John Kerry said in the 2004 election runoff. Turns out that Cnn had more feet on the ground in Iraq than did the military. F A C T........

Why wasn't obama's birth certificate and school records checked before he became president? The Press was to busy slagging the republican party?
fossil_digger Report This Comment
Date: December 05, 2009 03:44AM

we are amidst the most hostile of takeovers in history DK, and there isn't a damn thing the world can do but to pray Nancy Reagan didn't break Tecumseh's curse. enjoy what freedoms you have left for all they're worth because the end of the world as we have known it is upon us. the Repugnants have been doing a fine job of slowing it (keeping the shitbag libs at bay) but in the long run they have been propagating the same demise. the one world government is speeding towards us at mach speed now with nobody standing in it's way.

An excellent question DK. Actually there were many sources crying foul but the umpires seemed to all be asleep at the plate.

Every mention of this, then as now, was derided by the mainstream press as manifestations of racism or small mindedness posed by wackos and neatly disposed of as pure bunk. Had any serious investigation into his background been done there's at least a chance things might have turned out differently. Even as effects of that duping of the media has begun to wear on those (segments of the media) that were bedazzled during the campaign, whatever needed to be hidden is and what had to be cemented closed is also now .... unavailable and now considered a matter of state/national security.

As I've said before, many, many things will all come out once it's no longer of any relevance, but not while he's still in office

Even if he is replaced in 2012 the damage he causes during his reign will never be repaired. I do not believe he desires a one world government. He desires to bankrupt the nation and thereby destroying America. He is not doing this alone but I do not believe that this is the desire of the democratic congress, they are being duped by the white house to do this by being given everything they want all at once. Alqueda loves this administration because America can be destroyed without them ever lifting a finger. Say thank you Sheik Obama.
madmex2000 Report This Comment
Date: December 05, 2009 06:57PM

If you know so much ,why hasn't it helped you any? Cause your Dumber than a box of Rocks.

so suk a dik..and get in line.

I have an answer to all your questions Mrkim.

Because McCain was even worse.

Most of the time we elect the lesser of two evils not the best man for the job.

Since no one can say for sure I can only speculate that if McCain/Palin had made it in we : Wouldn't have seen any "I'll belittle the American people while kissing the rest of the worlds ass" tours, the Russians would have at least shown him the respect a US President is due, it's also unlikey the US Govt. would have become major share holders of GM or Chrysler, we wouldn't have had a 3 month gap between when McChrystal asked for the additional troops and when the President actually decided to make a call and finally agree to send them, much less would we have given the Taliban a time frame to wait things out before we decide to pull out the troops so they can just step up their shit again afterwards, we likely wouldn't have rushed $1.5 trillion worth of unexplained bailouts through congress lined with enough pork to fully fund several smaller nations, nor would the congress be expecting to pass healthcare legislation to drop us another $ trillion worth into deeper debt at the worst possible point in the history of our country financially.

These are just guesses, but I feel pretty strongly that none of the above would have occurred

Mrkim, you asked why Obama was elected and I answered it. You can speculate all you want but we are here now and have to deal with it, so stop living in the past and start helping now for a better future. I know this my sound like a public service announcement, but arguing about what might have been won't solve any problems. It just makes you sound like a bitter old man.
fossil_digger Report This Comment
Date: December 06, 2009 05:18PM

you brought it up and he gave you an honest answer. you got stuffed admit it.
fossil_digger Report This Comment
Date: December 06, 2009 05:36PM

it's sad that anyone really thinks that Barry is the answer to anything other than what he IS good at....community organization against "the man" more importantly "the white capitalist man". liberalism is the most dangerous "theology" to the survival of the world than any other factless ideological movement in history. and it's a good thing that their real agenda has become transparent to more people in recent months.
Mrkim Report This Comment
Date: December 06, 2009 06:17PM

You're right, it's all supposition as to what might have happened had the election gone another way, but the unanswered question still remains Wolfie .... what has he done that you see as beneficial to the nation since he took office

And, you won't convince me that a candidate with long affiliations with domestic terrorists,communist/marxist organizers, a racist/anti American preacher who then went on to publish an openly racist book revealing his inherent mistrust and disgust of white people (including members of his own family) looks anything like a wiser or better choice over a highly decorated Viet Nam war veteran (including several years as a POW) whose intended focus was on getting the economy back on track had he been elected.

You can try peddlin that shit just like the liberal media did during the campaign, but then, and now, that's a no sale here dude

I answered your question, Mrkim, of why Obama was elected. You are now asking a new question, and you made it very clear that your mind is made up that President Obama can not do anything right, so there is no debating just name calling.

I suggest we agree to disagree on this.
fossil_digger Report This Comment
Date: December 07, 2009 03:14AM

I guess if I were tryin to find support for havin chosen Big O I wouldn't wanna hafta do so by recounting his accomplishments since he's taken office either.

BTW, nice way to side step the issue

Mr Kim did ask that question previously, here is part of his post. How about an answer?

Someone should have asked her for her STD shot record.

just a coincidence? or just another fruitloop?