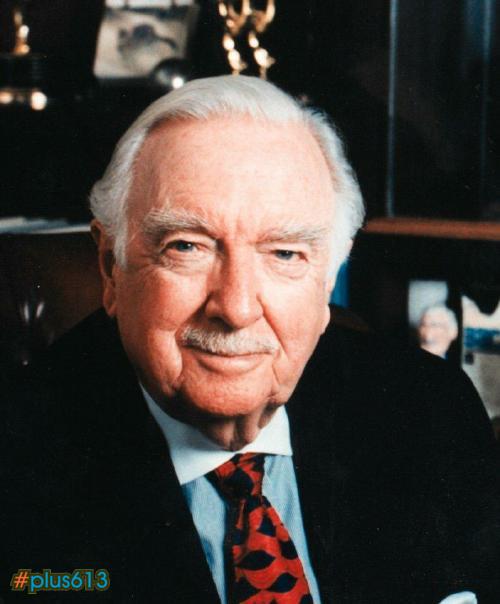 Walter Leland Cronkite Jr. was born Nov. 4, 1916, in St. Joseph, Mo., the son and grandson of dentists. The family moved to Houston when he was 10. He joked years later that he was disappointed when he "didn't see a single damn cowboy."

He got a taste of journalism at The Houston Post, where he worked summers after high school and served as campus correspondent at the University of Texas. He also did some sports announcing at a local radio station.

Cronkite quit school after his junior year for a full-time job with the Houston Press. After a brief stint at KCMO in Kansas City, Mo., he joined United Press in 1937. Dispatched to London early in World War II, Cronkite covered the battle of the North Atlantic, flew on a bombing mission over Germany and glided into Holland with the 101st Airborne Division. He was a chief correspondent at the postwar Nuremberg trials and spent his final two years with the news service managing its Moscow bureau.

Cronkite returned to the United States in 1948 and covered Washington for a group of Midwest radio stations. He then accepted Edward R. Murrow's invitation to join CBS in 1950. At CBS he found a respected radio-news organization dipping its toe into TV, and it put him in front of the camera. He was named anchor for CBS's coverage of the 1952 political conventions, the first year the presidential nominations got wide TV coverage. From there, he was assigned to such news-oriented programs as "You Are There" and "Twentieth Century." (He also briefly hosted a morning show, accompanied by a puppet named Charlemagne the Lion.)

On April 16, 1962, he replaced Douglas Edwards as anchor of the network's "Evening News."

Cronkite was the face of the "CBS Evening News" from 1962 to 1981, when stories ranged from the assassinations of President John F. Kennedy and the Rev. Martin Luther King Jr. to racial and anti-war riots, Watergate and the Iranian hostage crisis.

It was Cronkite who read the bulletins coming from Dallas when Kennedy was shot Nov. 22, 1963, interrupting a live CBS-TV broadcast of the soap opera "As the World Turns."

Cronkite was the broadcaster to whom the title "anchorman" was first applied, and he came so identified in that role that eventually his own name became the term for the job in other languages. (Swedish anchors are known as Kronkiters; In Holland, they are Cronkiters.)

"The most trusted man in America", Cronkite died at 7:42 p.m. with his family by his side at his Manhattan home after a long illness, CBS vice president Linda Mason said. Marlene Adler, Cronkite's chief of staff, said Cronkite died of cerebrovascular disease.

"The trust that viewers placed in him was based on the recognition of his fairness, honesty and strict objectivity ... and of course his long experience as a shoe-leather reporter covering everything from local politics to World War II and its aftermath in the Soviet Union," Safer said. "He was a giant of journalism and privately one of the funniest, happiest men I've ever known."