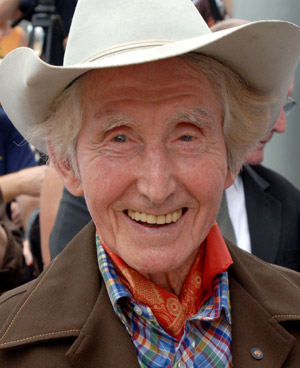 Dawson was born Herbert Henry in Warrnambool, Victoria, in 1913.

He rose to prominence after World War II with his radio show The Adventures of Smoky Dawson, which was broadcast from 1952 until the early 1960s.

A generation of young Australians listened to Dawson's adventures on his horse, Flash, and he was dubbed "Australia's first cowboy".

The show fascinated his fan club of 1 million members with whip-cracking, axe-throwing and Dawson's musical skills.

Dawson was also inducted into the ARIA Hall of Fame in 2005.

In the US, he was honoured by the Grand Ole Opry.

Australian of the Year Lee Kernaghan has farewelled the country music legend.

"What an honour it was to know you Smoky," he said.

"What a wonderful man, What a brilliant career.

"You gave so much to so many, we'll miss you so much," he added.

Lifelong friend Slim Newton says Dawson will always be remembered as a gentleman.

"He did his own thing all the time," he said.

Troy Cassar Daley thinks he will be remembered for his positive attitude.

"Every time you spoke to him... he had an upturn to anything you could say, you know, there was a real positive nature to him and Dot," he said.

"Also, I think I would like him to be remembered as a yard stick for relationships - that was true love what he and Dot had. I think what one thing you've got to understand is that that doesn't happen all the time."

Dawson is survived by his wife, Dot.

The pair married in 1944 and set-up the Smoky Dawson Ranch in Sydney's northern outskirts.